Charles Blow: That My Son’s Arresting Officer Was Black Doesn’t Change the Problem 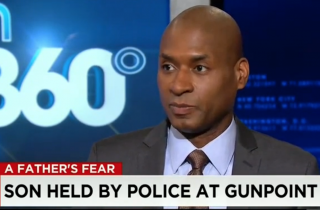 Five days after he tweeted about his son being detained at gunpoint by Yale campus police, New York Times columnist Charles Blow appeared on CNN to address criticism of his outcry over the incident.

Blow’s son, a third-year chemistry student at Yale University, was stopped by police at gunpoint earlier this week allegedly because he matched the physical description of a nearby burglary suspect. The incident turned into a column for Blow.

Several conservative websites discovered that the detaining officer was also black, leading them to consider the story “debunked.”

And so Anderson Cooper asked Blow directly on Thursday evening: “Does the fact that the police officer involved was african-american? does that change at the equation in your mind in any way?”

We talk about the police in general. And I am very happy that when he turned around and saw whoever it was with the gun he didn’t behave any differently. He saw a gun and an officer and he followed the very same script. You know, a bullet doesn’t know the color of the finger that pulls the trigger. It doesn’t care. Bullets don’t have emotions, they have directions. I think we as parents have to remember that, it’s not so clearly delineated in terms of who your kid might run into as an officer.

Asked whether race played a role in the incident, Blow responded that, over the years, he’s stopped writing about the race of police officers in his columns because:

It became more and more clear to me that it was more about culture of the police officers dealing with these young black men than individual officers dealing with these young black men. To me, it started building up like this is bigger than just them. I started to just, not like a crusade but my own comfort to say, I don’t need to mention these races.