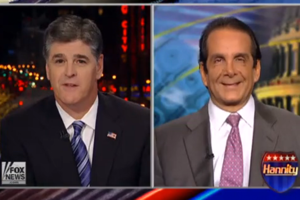 Possibly lost to many during yesterday’s White House time warp was a somewhat surprising, hearty compliment from the former president to Washington Post columnist and beloved conservative Charles Krauthammer: “he’s a brilliant man.” Given a chance to respond on Hannity. Krauthammer seems a bit apprehensive about expressing gratitude, instead assuring Sean Hannity, “my career is done.”

Krauthammer got a chance to explain his mostly tongue-in-cheek fears: “Well, you know when you get praise from President Clinton and you’re from my side of the aisle, that means that my career is done. I mean, I’m toast. Maybe NPR will take me– they’ve got a spot where Juan Williams used to be– but otherwise I’m done.” Luckily for Krauthammer, there are probably very few media enclaves more conservative than Hannity, and its host seemed more amused than upset, asking Krauthammer to explain what his thoughts on the Bush tax cut extension were that would somehow find him and President Clinton arguing on the same side.

Krauthammer explained that he saw the compromise President Obama was promoting to be mutually beneficial to either side, and particularly beneficial to the left, who he advised to give up their “religious hatred of anything that could help the upper income folks” so that “they could see their self-interest in this.” “I agree completely with President Clinton,” he added, in that this tax deal, while not ideal for either side, was a satisfying compromise. Though he did ad the caveat that, now that President Clinton and him are ideological buddies, “psychiatry awaits me.”

The full, policy-rich segment from last night’s Hannity below: