Chris Matthews: ‘I’m So Glad We Had That Storm Last Week’ – ‘Politically, I Should Say’
video

Chris Matthews: ‘I’m So Glad We Had That Storm Last Week’ – ‘Politically, I Should Say’ 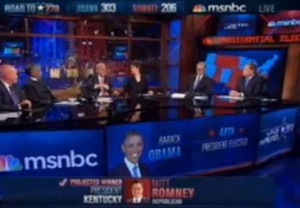 Have you ever seen one of those simultaneously heartbreaking and hilarious sports videos where a runner faceplants in spectacular slapstick fashion, inches from the finish line? Hardball host and MSNBC Election Night co-anchor Chris Matthews delivered the cable news equivalent of that when, with only minutes to go before the 3 am end of his shift, he strung together words that should never be used in relation to any tragedy, in any context, but particularly one as raw as the still-unfolding aftermath of Superstorm Sandy. Wrapping up the coverage, Matthews called Election Day “A good day for America,” but then added, “I’m so glad we had that storm last week because I think the storm was one of those things.”

Following an audible reaction from co-anchor Rachel Maddow, Matthews quickly added, “No, politically I should say. Not in terms of hurting people. The storm brought in possibilities for good politics.”

Maddow reached over and placed a hand on Matthews’ arm, perhaps to stop the digging, and did a prompt outro to the segment, and their portion of the broadcast. “MSNBC’s live coverage of the 2012 election continues after this with Thomas Roberts, and then 5 am with Willie Geist,” Rachel said. Here’s the clip, from MSNBC:

To be fair, there are probably few people who were fit to do a television broadcast at 3 o’clock this morning, even those with caffeine for blood like Chris Matthews, but the troubling part of this is not his slip, but his clarification. The degree to which President Obama’s response to Hurricane Sandy helped him politically is questionable, at best, but even if it totally handed him the election, it’s not possible to view the storm only as a political abstraction, “not in terms of hurting people.”

As a liberal, as an American, I’m glad that President Obama won, because Mitt Romney would have taken this country backward, and then some. As a New Jersey resident and an American, I’m glad that when Hurricane Sandy hit my state, we had a president and a governor who were able to set aside their ideological differences, and respond effectively. The degree to which that response demonstrated the importance of a strong federal government is a feature of that response, not of the disaster they were responding to, which caused death and destruction, and continues to cause misery. Maybe that’s what Chris Matthews meant to say, and should have. There’s a decent chance that a well-rested Matthews will apologize for the lapse during his next broadcast.

Ironically, it was on Matthews’ Hardball that Democratic strategist Mark Penn made the jaw-droppingly awful suggestion that President Obama needed a “similar event” to the Oklahoma City bombing to “reconnect” with the American people, yet another example of the pitfalls of political abstraction. Matthews himself was the subject of a false, out-of-context attack suggesting he had seen “political opportunity” in last year’s deadly earthquake and tsunami in Japan. In fact, Matthews’ remark was in reference to a question from a Japanese reporter, and not the disaster.

Update: Matthews tweeted about his comment shortly after the broadcast:

To clarify – I was thrilled at the cooperation between the President and state officials that made the country proud. Great bipartisanship.

Obviously I wasn’t talking about the horror of the storm. I grew up on the Jersey shore.