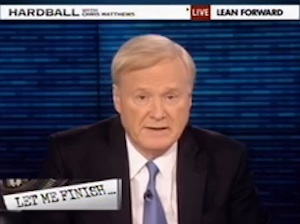 On Friday night’s Hardball, Chris Matthews responded to the news that Pat Buchanan was leaving MSNBC by giving the conservative icon a warm sendoff. “He’s leaving the network and won’t be working with us from now on,” Matthews wistfully lamented. “I miss him already. We’ve had dragdown fights right here on this set and I’ve said things that drive him up a wall and he’s said things that have driven me up a wall. We’ve done it here in a pretty good spirit most of the time and have managed to be friendly and friends throughout it all. And, obviously, I’m going to miss his cheerful fun-loving irascible presence around here.”

RELATED: Pat Buchanan Is ‘Departing’ MSNBC: I Was ‘Blacklisted, But Not Beaten’

Matthews observed that there were two aspects of the erstwhile MSNBC pundit he wanted to acknowledge. “One highly and wonderfully positive,” Matthews said. “The other, well, that’s the one that gets him into trouble.”

“The good quality above his relentless genialities is deep even formidable loyalty. Pat sticks up for his people like nobody I know. He will laugh with you about the frailties and foibles of those he served but he never, ever quits being loyal to them. His most famous proof of loyalty was his strong defense of President Richard Nixon. At his moment of greatest vulnerability, when so many others were running for the tree line, Pat Buchanan was out there in the open field with a national television cameras right on him.”

“Name another public figure who has built his public career on being a stalwart loyalist to Richard Nixon,” Matthews continued. “Loyalty is the heart of Pat’s being. He is loyal to country, to church, to neighborhood to heritage. To Pat, the world can never be better than the one he grew up in as a young boy. Blessed Sacrament Church and Grade School, Gonzaga High School, Georgetown University. No country will ever be better than the United States of America of the early 1950s. It’s his deep loyalty to preserving that reality and all its cultural and ethnic aspects that has been his primal purpose and is what has gotten him into trouble. Not just now but over the years.”

Watch Matthews heartfelt tribute to Buchanan below via MSNBC: