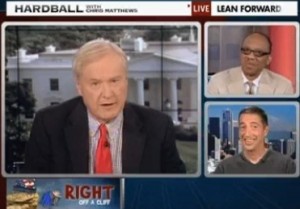 Chris Matthews was discussing the ongoing debt ceiling negotiations with his guests Eugene Robinson and Ron Reagan when he made a curious statement about The O’Reilly Factor. Theorizing that Republican presidential candidate Michele Bachmann is actually calling the shots on the Republican debt ceiling position, Matthews reviewed her interview last night with Bill O’Reilly and concluded that O’Reilly’s show is “where you go when you want to speak their religion . . . when you want to go far right, I think you go over to Bill.”

Matthews introduced the clip of Bachmann saying, “here she was last night on Fox, home base for this kind of thinking.” Although it may have seemed like Matthews was beginning to launch an attack on O’Reilly and his supposed comfort zone for “far right” thinking, Matthews surprisingly switched gears and admitted how much he enjoyed the interview, saying, “I love that scene . . . between Bill O’Reilly who has heard it all, he’s a little cynical occasionally and this absolute true believer [in Bachmann].”

The possible affection for O’Reilly continued as Matthews jokingly emulated him a few seconds later, raising his hand and saying, “let me be Bill O’Reilly, I got my hand up like Bill O’Reilly right now. You see my hand, that’s a Bill O’Reilly move.” When the O’Reilly references finally died down, Matthews returned to being serious about the debt crisis and predicted that if the Social Security checks actually do stop coming on August 3rd when the debt ceiling is potentially not raised, that many in the country will be very angry and that “every single American will be watching programs like this.” Or after some of Matthews favorable words here, maybe they’ll be checking out O’Reilly!