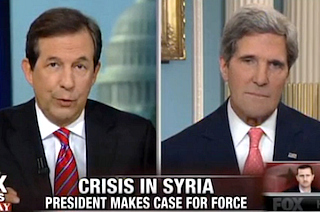 “It will allow us to do even more coordinating with our friends and allies, do more planning, and frankly be for more effective,” Kerry said. “I think this is a smart decision by the President, a courageous decision. He is not trying to create an imperial presidency, he’s trying to respect the process by which we are strongest in this country.”

Wallace noted that the rebels may be under a slightly more urgent timetable than the U.S., and referenced a newspaper in Damascus had portrayed Obama as “flinching.” “Haven’t you handed Syria and Iran at least a temporary victory?” Wallace asked.

“I don’t believe so at all,” Kerry said. “That is in the hands of the Congress.”

Kerry did not believe Congress would decline military action.

“I don’t think that’s going to happen,” Kerry said. “I can’t contemplate that the Congress would turn its back on all that responsibility, and grant impunity to a ruthless dictator to continue to gas his people. Those are the stakes.”

Kerry also affirmed that Obama could act without Congress, including before Congress reconvenes on September 9th. “If the Assad regime were to be foolish enough to attack yet again in the meantime, of course the President of the United States knows he has the power to do this, and I assume he would move very, very rapidly,” Kerry said. “But he feels were are stronger in getting the United States as a whole to gel around this policy, to understand it better, and to know what the strategy is and why the United States needs to do this.”

The Secretary of State pushed back against Wallace when the host asked why the President was waiting ten days until Congress returned from vacation.