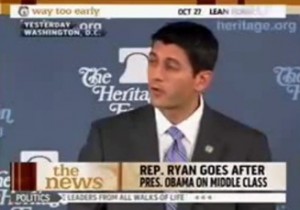 In just the latest iteration of the conservative “class warfare” drumbeat, Rep. Paul Ryan (R-WI) riffed on President Obama and the Occupy Wall Street protests, accusing the President of “preying on the emotions of fear, envy and resentment,” and of “sowing social unrest.”

The “logic” behind this, if you can call it that, seems to be that by proposing the American Jobs Act, the President is making people mad that Republicans won’t support it.

Speaking at the Heritage Foundation, House Budget Committee chairman Ryan responded to the President’s persistent criticism of Republicans’ unwillingness to pass the American Jobs Act (individual provisions of which have all had bipartisan support in the past) by oddly praising Obama’s 2008 presidential campaign. “Instead of appealing to the hope and optimism that were the hallmarks to his first campaign,” Ryan said, he has launched his second campaign by preying on the emotions of fear, envy and resentment.”

Ryan, who proposed a budget earlier this year that would have replaced Medicare with a voucher system, which even Newt Gingrich called “extreme,” continued, “This has the potential to be just as damaging as his misguided policies.”

Like his fellow Republicans, Ryan is suddenly no longer fond of pitting Americans against each other. “Sowing social unrest makes America weaker, not stronger. Pitting one group against another only distracts us from the true sources of inequity in this country.”

This “class warfare” construct is baffling in that any adult would try to use it, and all the more baffling because it works on some people. According to a new poll, 69% of Americans think Republican policies mainly benefit the rich, versus 12% who believe that about President Obama. Blaming the President for “inciting class warfare” is like blaming George Lucas for pitting Alderaanians against Grand Moff Tarkin. All President Obama is doing is telling the story that Americans, if polling is any indication, know is true.

Here’s a clip  of Ryan’s remarks, from Morning Joe: