CNN Contributor: AZ Sheriff Doesn’t ‘Think The Gay Should Be Rubbing Off On Mitt Romney’
video

CNN Contributor: AZ Sheriff Doesn’t ‘Think The Gay Should Be Rubbing Off On Mitt Romney’ 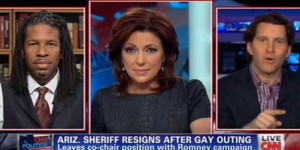 On Monday morning’s CNN Newsroom, contributors Will Cain and LZ Granderson held a rematch of Sunday’s heated exchange over Arizona Sheriff Paul Babeu‘s resignation from former Massachusetts Governor Mitt Romney‘s campaign. At issue was whether Babeu resigned because he is now an out gay man, or because he dated an illegal immigrant, or because of allegations he threatened to deport an ex-boyfriend in order to keep the affair quiet.

Anchor Kyra Phillips expected more fireworks from her panelists, but Will Cain didn’t see it. “I heard you in the tease a minute ago that Will Cain and LZ Granderson are going to go at it. I don’t think so.”

He continued, “The only point I think we disagree with is whether or not this story has any bigger meaning or context, and I don’t think it does. I think what you have here is largely a lover’s spat between a sheriff and his ex-lover, meaning we shouldn’t trust, by the way, what either side is saying right now. But we have a sheriff who’s come out as gay. Big deal. I don’t see the bigger story and I don’t see how it impacts Mitt Romney’s campaign.”

Phillips asked Granderson, “Is it damaging? You have the gay issue, the immigration issue, the fact that Babeu allegedly threatened to deport his ex-boyfriend if he outed him.”

Granderson began by reminding Cain that Babeu “didn’t come out as gay, he was outed,”  and noted that Babeu’s actions seem to belie the notion that his resignation from Romney’s campaign was about the scandal, not the gay. “This man is going to continue to run for Congress,” he said, “but pull out of helping Mitt Romney run for president. Now I ask you, what are the qualifications to run for Congress, and how are they different than the ones helping him run for president? You know, why did he resign? Did he resign because he didn’t think he was in an environment in which he could be openly gay?”

“I don’t know how lz can draw that conclusion from one factor among three in this story,” Cain responded, pointing out that the serious allegations against Babeu will continue to drive the story. “It’s not hard to see why the sheriff would say, I don’t know that I’m a good figure to be involved with the Mitt Romney campaign now, I’m not going to do this to this campaign.”

“That only affects his own career,” Cain said. “Perhaps he is taking a noble stance. I have some negative publicity around me right now. I don’t think that should rub off on the guy i’m endorsing.”

“I don’t think the gay should be rubbing off on Mitt Romney is what he’s saying. Not necessarily my scandal.” Granderson replied.

As is often the case, the truth lies somewhere in the middle. Babeu was a campaign state co-chair, a post that is more disposable that a wad of Kleenex. In 2008, then-Senator Barack Obama axed campaign surrogates like these for sneezing wrong. Cain is probably right that the result would have been the same had Babeu been involved with an undocumented woman making these same allegations. Romney’s running for office, for Pete’s sake.

However, the outing of Babeu is a prominent facet of this story, and as Granderson later pointed out, Mitt Romney’s arc on gay rights, and the Republican Party’s crusade against marriage equality and other LGBT rights, create the appearance that washing the gay away is at least a bonus, if not the main point of all of this.