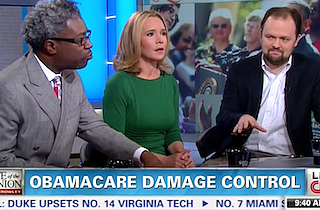 On State of the Union Sunday morning, a panel debated whether the Affordable Care Act’s federal exchange website problems might cripple the law, with New York Times’ Ross Douthat arguing that if young, healthy, middle class people don’t sign up, which they currently can’t, Obamacare will fail.

“The entire presidency is riding on [Obama’s] ability to do that,” Douthat said.

“This is a problem with this story,” Cornel Belcher said. “You go back to a couple years under Bush, and you heard Speaker Boehner talking about horrendous rollout of a program, and he was talking about prescription drugs. These don’t necessarily rollout well. But this is a process sorry. You’re missing the forest for the trees. It’s not about a process. It’s about a value.”

“The policy is the process in this case,” Douthat said. “The design of this system is built around getting a certain number of people to use the website and sign up.”

“Ross is right,” The Hill’s A.D. Stoddard said. “It’s a fundamental, structural issue. They needed a great start. You could have had glitches later. You needed to get people pouring into the system, because the sick are pouring into the exchanges; for the first time they can get covered when they couldn’t before. Now you need young, healthy people to balance out the risks and to actually keep it affordable. Without those whose consumers, it’s not affordable anyway.”

“We’ve seen this before,” Belcher said. “We saw it in Massachusetts where the bulk of the people signed up for it, they signed up towards the end.”

“One, it wasn’t as polarizing an issue,” Douthat rebutted. “And you weren’t trying to sign up people on a national scale.”

Watch the whole clip below, via CNN: