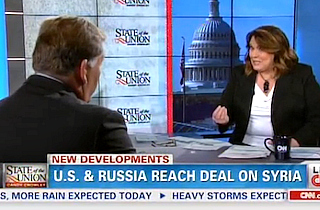 On State of the Union Sunday morning, host Candy Crowley asked House Intelligence Committee Chairman Mike Rogers whether it mattered that Vladimir Putin and Russia gained from the Syrian deal if it meant the destruction of Syrian President Bashar al-Assad’s stockpile of chemical weapons.

Rogers had argued that Russia’s compliance in the deal was only to further its own goals in the region, goals counter to those of the U.S. “This is a Russian plan for Russian interests,” Rogers said.

“But who cares, if it has a chance to get rid of chemical weapons?” Crowley asked. “Do we really care that Russia got the diplomatic edge?”

“If it were just that, that’s true,” Rogers said. “But if the president believes, like I do, that a credible military force helps you get a diplomatic solution, they gave that away in this deal. If you believe there’s broader national security interests in Syria—I know the president does, I clearly believe that—we have al Qaeda pooling in the West, we have Hezbollah operating there, it’s a proxy fight, and by the way, the Russians have been there the whole time and have been complicit, in my mind, in allowing chemical weapons to be used—they got exactly what they wanted.”

“Remember, this is a framework,” Rogers said. “There’s a lot of shoulds, not a lot of hard dates. All of this has to go to the U.N. So not one ounce of chemical weapons came off the battlefield, but we’ve given up every ounce of our leverage.”