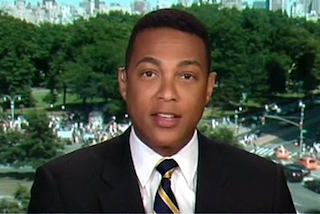 Lemon addressed the wounds inflicted by black males onto their community on his “No Talking Points” segment Saturday afternoon, saying he was able to bring this up now that the George Zimmerman trial had concluded. Before the verdict, right wing media had consistently asked why the “liberal media” was fixating on Trayvon Martin while ignoring rampant black-on-black violence, a “deflection,” in Lemon’s words, from the injustices of the Martin shooting. But now that Zimmerman had been acquitted, it was time “for some tough love on the subject.”

Lemon played a clip of O’Reilly stating, “The reason there is so much violence and chaos in the black precincts is the disintegration of the African American family…Raised without much structure, young black men often reject education and gravitate towards the street culture, drugs, hustling, gangs. Nobody forces them to do that. Again, it is a personal decision.”

“Bill’s got a point,” Lemon said. “In fact, he’s got more than a point…In my estimation, he doesn’t go far enough.”

RELATED: O’Reilly To Geraldo: ‘I Don’t Care’ If Black People Feel Like I’m ‘Stereotyping’ Them

Lemon then listed five essential reforms black men need to make in their lives in order to improve themselves and their communities: hike up their pants, remove the n-word from their vocabulary, take care of their communities, finish high school, and lower the rate of children born out of wedlock.

“More than 72% of children in the African Americans are born out of wedlock,” Lemon said. “Studies show that lack of a male role model is an express train right to prison, and the cycle continues.”

“That said, though, the political right is not off the hook.” Lemon played a clip of Kirsten Powers remarking on how convenient it was the conservative media only cares about black violence when they can use it to “stick it to the black community.”