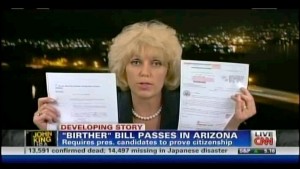 In a Friday appearance on CNN’s John King USA, Birther queen Orly Taitz rolled over the eponymous host, and beleaguered guest Cornell Belcher, like that boulder in Raiders of the Lost Ark. Taitz emptied clip after clip of false and unsubstantiated claims at a helpless John King, but just when all seemed lost, King  fought back with his own daisy-cutter of crazy, suggesting that President Obama has been rebutting Birthers in code.

There are probably many who wonder why CNN would choose to give twelve minutes of airtime to the widely discredited Orly Taitz. While most of Taitz’s wild claims have been disposed of here and elsewhere, Donald Trump has certainly proven that Birthers are good for business, media-wise.

It also seems as though John King thinks he is going to be the one to spring that one special logic trap that’s going to make Taitz & Co. spring up from their pews, cleansed of the demons, the Holy Spirit of sanity in their feet. Taitz comically disposes of that notion in a Kenyan minute, and leaves King huddled at her feet, covered in Birther pea soup. Belcher tries valiantly to cut in, but is met only with Taitz’s Dueling Birther Banjo.

Then, something wonderful happens. At about the 9:30 mark, King unspools his own theory, saying “This is the cynic in me, Cornel Belcher, the White House says they don’t worry about this, but every now and then, you start to hear things where I think that somebody, quietly, is trying to at least use a subtle message to rebut this.”

He then plays several clips of the President saying things like “We’re all Americans,” or otherwise referring to Americans with the first-person plural pronouns “we” and “us.”

There’s nothing to King’s theory, and it seems to be a pretty obvious example of the pitfalls of false “balance” in journalism. Sometimes, there really isn’t anything “on the other hand.”

Stick with the segment until the end, though. It’s worth it to hear King apologetically explain the segment with a line that absolutely has to go on t-shirts in the CNN gift shop: “Our job is not to cover just things that we know to be true…”