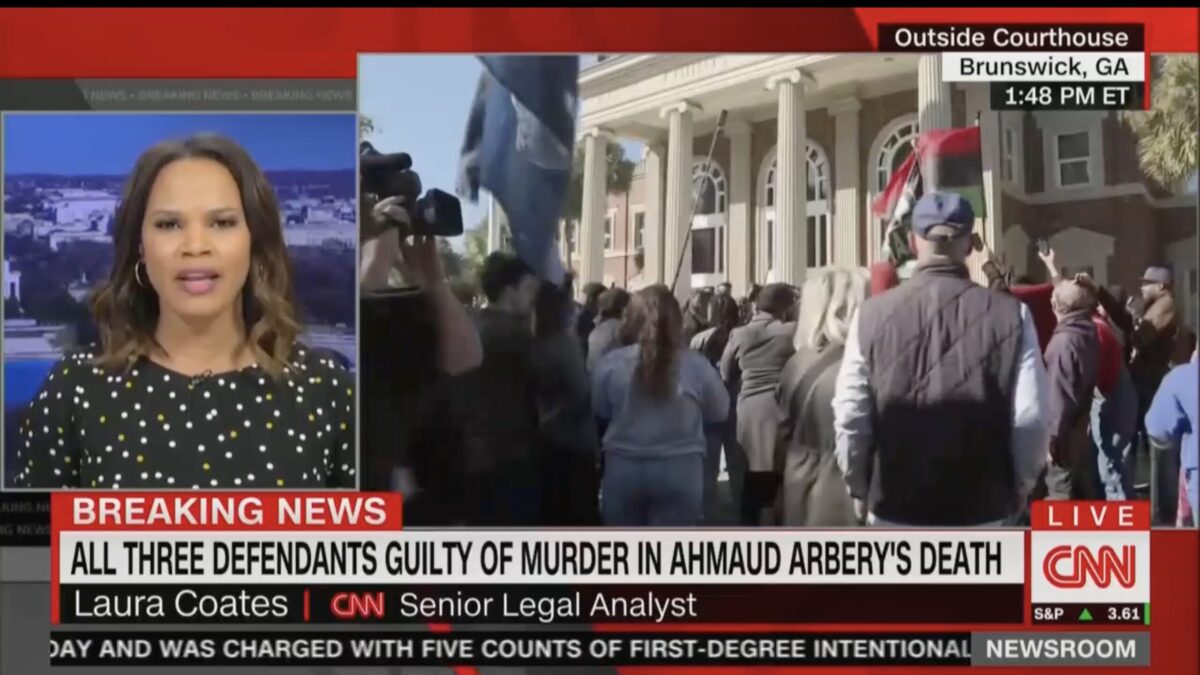 CNN senior legal analyst Laura Coates reacted to the guilty verdicts in the trial of the three men accused of murdering Ahmaud Arbery, and specifically called out the attorney for one of the defendants for her “gutter” arguments, accusing her comments about Arbery as an attempt to make the jury view him as “less than human.”

Arbery was out jogging in February 2020 when he was chased down and confronted by Travis and Gregory McMichael in their truck, with Travis McMichael eventually shooting Arbery. A third defendant, William “Roddie” Bryan, was following the McMichaels in his vehicle and recorded the incident on his cell phone.

After the verdicts were read on live television, CNN’s Ana Cabrera asked Coates, a former federal prosecutor, for her reaction.

“This was absolutely the right call,” said Coates, “and this is the essence of justice.”

She then spoke about the tragedy of the loss of Arbery’s life, a 25-year-old young man, who was killed after “he encountered these three men, three strangers, who felt entitled for him to stop simply because they thought they had some authority to get somebody who was jogging to stop and talk to him.

“And when he didn’t, they pulled out a shotgun and he was shot and killed.”

Describing Bryan’s cell phone video as “so graphic and so horrible to look at,” Coates recounted how Arbery had “tried to run away for five minutes until he was cornered,” until he “could run no more.”

Coates then addressed the defendants’ arguments, how Bryan had claimed he was just a witness but the jurors were not persuaded by that. Only Travis pulled the trigger, but the other two men “played an active role,” she stated, praising the prosecutors for doing “a phenomenal job ensuring that the jurors saw each of these men were culpable and there was no self-defense claim.”

“Travis McMichael pulled the trigger,” she said. “That is not in dispute. The other two men aided and abetted hunting this man down. Why? Because they wanted him to stop. Not because they had some viable color of law or authority, these are people who for all intents and purposes are laymen.”

The jurors, 11 White, 1 Black, “came to the same conclusion,” she said. “A black man [was] hunted down on the streets of Brunswick, Georgia. Why? Simply because he existed and had the audacity to run and not stop when three white strangers told him they’d blow his head off if he didn’t.”

The defendants “took away the life of somebody’s son, somebody’s loved one, a human being,” “will now serve the rest of their lives in jail,” and are now facing a federal hate crime trial.

In a later segment on the network, Alisyn Camerota asked Coates about a statement issued by Laura Hogue, one of the attorneys for Gregory McMichael, who had “made those comments about Ahmaud Arbery’s appearance that struck so many as racist tropes,” and asked her for her response.

Hogue had said that she was “floored, floored with a capital F” about the verdict, and reporters described her face as “red with tears.”

Coates had not heard Hogue’s comments until Camerota read them, and seemed taken aback.

“Well, frankly, I’m not sure why she’d be floored when she was in the gutter when it came to the comments about the hygiene of a victim,” she replied, comparing Hogue’s comments during the trial about Arbery’s clothing and his “long, dirty toenails” to the idea of criticizing a rape victim’s appearance.

“We don’t allow that in the courtroom because we know there is a line that ought to be drawn in the denigration and villainizing and vilifying of people who have been harmed by criminals,” said Coates.

Hogue’s courtroom comments were “egregious,” she continued, “but more importantly and less shockingly, it’s not an effective strategy as a defense,” as Hogue was “hoping” that the jury “would look upon him as less than human,” as “somebody who was dirty, who did not deserve the humanity that is required when you deal with human beings,” because then they would give a less than guilty verdict to the defendants who killed him.

This defense strategy “was a gross miscalculation” and “insulting to the intellect” of the jurors, said Coates, saying that she hoped its failure would be a deterrent to others:

And I hope, frankly, as much as the verdict should be a deterrent to anyone else who attempts to be a vigilante and to attack, assault, and go after somebody because they happen to be running through, quote, unquote, your town, I hope it’s also a deterrent for future defense attorneys… that you do not, you do not go to the gutter, hit below the belt in some pretextual reason to defend your client.

If you can not defend above the belt, you need not be in the courtroom.