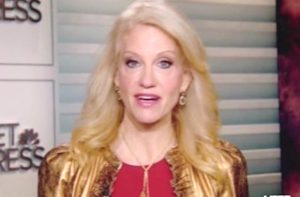 Kellyanne Conway thinks that Hillary Clinton needs to take a good hard look at her own shortcomings before blaming others for the fact that she lost to Donald Trump.

In the days that followed Clinton’s surprising election defeat, she and her aides have said that she would’ve won if FBI Director James Comey didn’t sink their momentum with his letters about her email server investigation. Chuck Todd asked Trump’s campaign manager about that on Sunday’s Meet The Press, to which, Conway found it “unfortunate” that Clinton World was using that to excuse their loss.

“I can’t believe it’s always somebody else’s fault,” Conway remarked. “Sometimes you have to take a look in the mirror and reflect on what went wrong.”

Conway’s first letter announced that the FBI discovered a new email collection pertaining to Clinton’s private server, though his second letter effectively cleared her by saying that almost every email was a duplicate of previously examined messages.