Cory Booker Sounds Like A Candidate, But His Promise Will Be Squandered If He Faces Chris Christie
video

Cory Booker Sounds Like A Candidate, But His Promise Will Be Squandered If He Faces Chris Christie 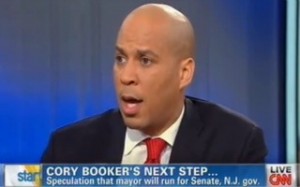 Newark Mayor Cory Booker is sounding more and more like a candidate for governor of New Jersey in 2013. Sitting down with CNN’s Soledad O’Brien on Monday, Booker took the occasional swipe at his prospective opponent, New Jersey’s Republican Gov. Chris Christie. Booker may a viable prospect to challenge Christie, but he’s also a candidate for bigger things beyond New Jersey. If he runs, a brutal campaign will sap his viability and may result in a deviating loss – damaging Booker’s brand and limiting his ability to run successfully for future offices.

Asked about his potential gubernatorial ambitions by O’Brien on Monday, Booker replied by citing polling results that show Christie is not in an unassailable position to win a second term. “Christie is vulnerable,” Booker said. “There’s a lot of issues in our state that he’s not falling in line with; from women’s issues to environmental issues, from really going in a balanced way.”

So, is Booker a candidate? He says he’ll make his decision clear in the next 10 days. If his heart is telling him to challenge Christie, as I believe it is, his head is most certainly saying to wait for a Senate seat to open up in 2014. But his head and his heart both have to compete with the state’s Democratic party. For them, the only viable challenger with a chance to unseat Christie is Booker.

New Jersey’s Democrats have many reasons to court Booker to challenge Christie. Newark’s mayor is the only Democrat with the statewide name recognition and positive favorability numbers to jump into an election against the outspoken and relatively popular Christie tomorrow and make a go of the race.

According to a Public Policy Polling survey of the political landscape in New Jersey, released on November 30, Booker enjoys a 48/20 percent favorability rating with just under a third of voters saying they have no opinion of Newark’s mayor. Compared to the other viable candidates that PPP tested (No, Bruce Springsteen is not running for governor), Booker is the only candidate with such pull.

State Sen. Richard Codey has a favorability rating which is above water, but he too is relatively unknown to New Jersey’s voters – 43 percent said they had no opinion about him. The electorate, no surprises, has short memories.

Codey replaced Gov. Jim McGreevey when he abdicated the governor’s office in New Jersey after announcing that he was gay and had been having an ongoing affair with another man in 2004. Codey’s short-lived administration was characterized by his efforts to restore public trust in New Jersey’s state government.

His championship of anti-corruption efforts, fund-raising reforms and overhauling of ethics rules put him at odds with many of his fellow New Jersey Democrats. Codey left office in a relatively good position politically, but his desires took a back seat to those of first-term Sen. Jon Corzine who would run for and win the governorship in 2006.

Codey’s fortunes among his Democratic compatriots have not brightened in the Christie-era. He was ousted in 2010 as state Senate president after Democratic powerbrokers organized a coup. The Garden State’s Democratic machine would hard-pressed to support Codey over any more viable prospect as a challenge to Christie in 2013.

Given Democrats thin bench, Booker is the obvious choice to face Christie. He is not just a local powerhouse but a dynamic figure with national prospects – he served as a high profile surrogate for President Barack Obama during the 2012 campaign and felt no compulsion to tow the party line if he disagreed with it (he landed in hot water with the Obama campaign when he said he found their attacks on Mitt Romney’s tenure at Bain Capital “nauseating.”

Secondly, while his job approval remains artificially high due to the federal and state government’s response to Hurricane Sandy, Christie is remarkably popular. Several recent polls confirm Christie’s approval to be at record levels – PPP puts his total favorably at 67 percent.

Finally, PPP finds Booker is running 14 points behind Christie in a head-to-head matchup. That percentage would surely be reduced after a long and bloody campaign, but there is no guarantee that Booker could unseat Christie. What is certain is that a campaign waged by the two heavyweights would be a national spectacle and would damage the brands of both politicians considerably.

Republican politicians have the same problem that Democrats face when seeking talent to run statewide for a U.S. Senate seat in 2014 that will likely be vacated by Sen. Frank Lautenberg (D-NJ). Booker may find the prospect of running for Senate and occupying a six-year term in the “world’s most deliberative body” a boring prospect. It is unsurprising that Booker’s his loyalties and passions reside in New Jersey, but Newark’s mayor has more to lose than to gain from a challenge to Christie.

Mayor Booker is, however, never one to shy away from a challenge. He may view the titanic collision of forces that would be summoned by a challenge to Gov. Christie to be an attractive prospect. As Garden State politics goes, where statewide races are generally lopsided contests where the outcome is rarely in doubt, a Booker-Christie race is a Götterdämmerung which tickles the fancies of politics-watchers.

For Booker, however, it is a smarter move to bide his time and walk into the Senate in 2014. If he runs and loses to Christie in 2013, his brand will be significantly tarnished. To that warning, I can already hear Mayor Booker say, ‘What’s worth having if you didn’t have to fight for it?’