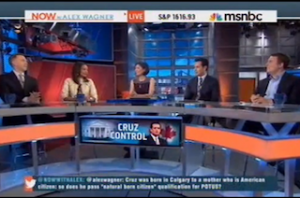 Jon Stewart touched on Senator Ted Cruz‘s Canadian origin story earlier this week on The Daily Show, but by Friday the Texas Republican’s eligibility was (semi) serious news on MSNBC’s Now with Alex Wagner. After playing a series of clips in which Donald Trump, Mitt Romney and others questioned President Obama‘s birthplace, followed by a piece from Stewart, Alex Wagner asked her guests how big of a problem this could be for Cruz’s presidential chances.

“If that’s what the right had to say about someone who was actually born in this country,” Wagner asked, “what will they say about a foreign-born first-term senator with his sights on the Oval Office?” Cruz has made his potential interest in the GOP presidential nomination clear, but questions remain as to whether he passes the “natural-born citizen qualification.”

BuzzFeed’s Ben Smith made the point that among all of the Birther craziness during Obama’s two campaigns for president, the actual legal issue did not get resolved, because there was no evidence that he was born anywhere but Hawaii. “I think the general theory among lawyers is if this came up, the courts would find a way to not rule on it.” So really the only way it could be an issue for Cruz is if his political opposition makes it one.

Bloomberg Businessweek’s Josh Green didn’t anticipate Cruz having much trouble with the existing Birther movement, because they’re a “bunch of whack jobs on the right, not the left. That’s Ted Cruz’s base.” But the question still remains whether a new Birther movement could rise up around a Cruz candidacy.

Wagner pointed out that “there’s a distinct strain of racism and otherness that flowed through the Birther movement” with Kenya perhaps representing a scarier origin for some people than Canada, or even Cuba where Cruz’s father was born. “I love Canada,” Wagner said, but she did wonder aloud if “we can trust” someone with “allegiance to the Mounties.”