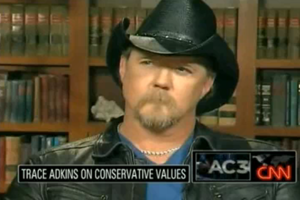 One of the major sources of Sarah Palin‘s appeal, many speculate, is that she is, in her words, the first among equals in a party of “normal, hard-working Americans.” But it seems even those that like her fear that she has become too polarizing. Take country star Trace Adkins, for example, who admits that “I love her to death,” but expresses genuine political fear at the prospect of Palin running for president.

Adkins appeared on Anderson Cooper 360º last night for some post-game analysis of Palin’s Iowa speech, and the general political climate the Tea Party movement has created in anticipation of November’s general elections. Providing one of the more level-headed and accurate descriptions of the Tea Party, Adkins rightly identified that “there are a lot of conservatives that are frustrated and that are ticked off,” and argued, “I don’t think it matters which party you belong to– it’s a bad year to be an incumbent.” That said, when Anderson Cooper asked him the central question surrounding the future of the Tea Party– what will happen when they become incumbents– Adkins didn’t have too much of a clear answer, but captured the general attitude of the movement as eloquently as anyone has so far: “they don’t want their conservative leaders to reach across the aisle and work with the other party; they want them to leer across the aisle and give them the finger.”

As for Palin, when asked about what he thought of her presidential ambitions, Adkins repeated that he hoped she would reconsider rather than hurting the party. “She can’t win,” he argued, “she’s become a punchline.”

The interview from AC360º via CNN below: