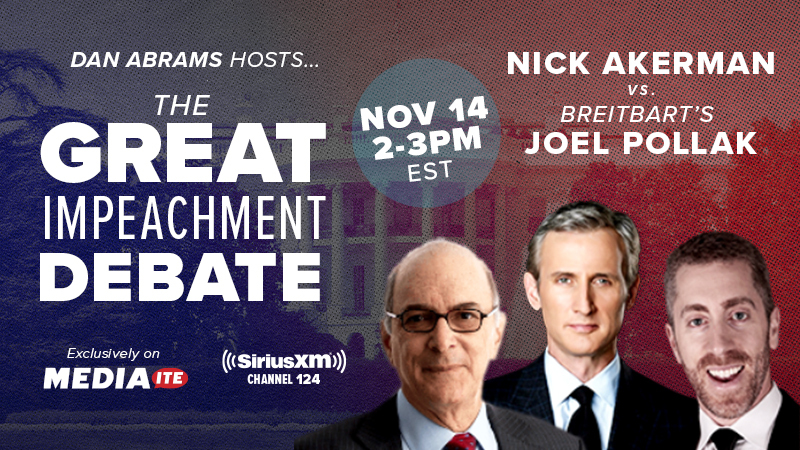 Mediaite will be airing a live debate on the impeachment inquiry of President Donald Trump, moderated by ABC News Chief Legal Analyst Dan Abrams. This will be the first debate ever held at the renowned SiriusXM ‘Fishbowl’ event space which has hosted the biggest names in entertainment and politics from Hillary Clinton, to KISS, to Taylor Swift.

Arguing the case for impeachment will be Nick Akerman, who was a member of the Watergate prosecution team and served as Assistant United States Attorney in the Southern District of New York.

Arguing against impeachment will be Breitbart senior editor-at-large Joel Pollak. Prior to his current role, Pollak worked as the site’s editor-in-chief and legal counsel and was recruited by founder Andrew Breitbart. Pollak also mounted a run for Congress in Illinois in 2010, winning the Republican nomination but losing in the general to Democratic Rep. Jan Schakowsy.

Pollak is also the author of several books and has a law degree from Harvard Law School.

Akerman has laid out the following articles: Abuse of Power and Obstruction of Justice.

The debate will be a structured format with opening statements, rebuttals, Abrams questioning both attorneys on their arguments, the two guests directly questioning each other and final arguments.

“The Great Impeachment Debate” will be live-streamed on both Mediaite and Law&Crime on Nov. 14 from 2 p.m. to 3 p.m. and will air live on Abrams’ radio show on SiriusXM’s P.O.T.U.S. Channel 124, which regularly airs The Dan Abrams Show.