Dana Perino: Roberts’ Decision Did Not Protect Court’s Reputation, ‘He Probably Made It Worse’
video

Dana Perino: Roberts’ Decision Did Not Protect Court’s Reputation, ‘He Probably Made It Worse’ 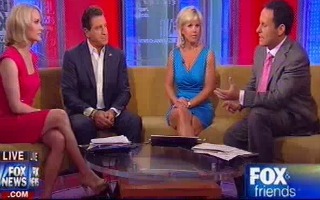 Former White House Press Secretary and host of The Five, Dana Perino, appeared on Fox & Friends on Monday where she threw cold water on the claim which some conservatives are making that Chief Justice John Roberts’ decision on health care was made to ensure the Supreme Court’s neutral reputation. “In the long run he probably made it worse,” said Perino, because those praising Roberts’ decision today are “fair weather friends” who will turn on him after he makes his next conservative ruling.

Perino, who was involved in the vetting and confirmation process that elevated Roberts to the Chief Justiceship in 2005, said that conservatives who fought for him were saddened by his decision to uphold the health care reform law.

“The level of disappointment amongst a lot of people, including myself, is very high,” said Perino.

Perino said that liberals are not going to embrace the Roberts court yet, as evidenced by a piece yesterday in the New York Times on Sunday which warned progressive voters to be weary of the unpredictable Chief Justice.

“So you saw yesterday in the New York Times, liberals are so wanting to paint the Supreme Court as right-wing nuts that they’re already starting to warn, ‘don’t get too comfortable with Roberts,’” Perino said.

She went on to say that she thought some arguments that Roberts’ decision was good for the long-term reputation of the Court were dubious.

Some conservatives consoled themselves on Thursday saying, ‘oh, look how great it is. They limited the Commerce Clause. And, they painted President [Barack] Obama in a box, because they announced his big domestic achievement was the largest tax in American history.’ To an extent you could make that argument, but I do think it was the wrong decision. It makes me sad because the health care industry is going to be in chaos for a long time.

Co-host Gretchen Carlson asked if Perino thought that the American public would see this ruling as a tax increase, or just see the headline “that President Obama won.”

Perino replied that she thought likely voters would be split on the matter – 54 percent of people, Perino said, wanted it repealed and Justice Roberts is not going to change their minds.

She went on to say that she thought the Court did damage its reputation in the long run with this ruling – contrary to popular belief.

“One of the lines was that he wanted to protect the integrity of the institution,” said Perino. “I actually think in the long run he probably made it worse. Because, you saw in that New York Times editorial, this could be the first step in the evolution of Chief Justice John Roberts becoming a great Chief Justice. Well, those are fair weather friends. Next year, if they rule on something that is considered a conservative argument that they don’t like, they will throw him under the bus again.”