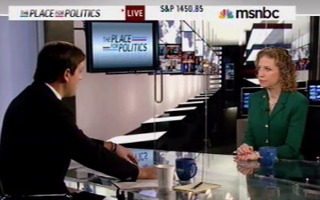 Democratic National Committee chair Rep. Debbie Wasserman Schultz (D-FL) joined Luke Russert on MSNBC on Wednesday where she insisted that, now that a deal has been reached to avert the fiscal cliff by raising tax rates on high-income earning Americans, increasing the debt limit will not become the political football that was for Republicans in 2011. She said that Democrats will not negotiate with Republicans on raising the debt ceiling limit and said that any future spending cuts will be balanced with more revenues to the government.

RELATED: Rep. Eric Cantor On Senate-Passed Fiscal Cliff Deal: ‘I Do Not Support The Bill’

Asked how President Barack Obama could avoid negotiating with Republicans regarding spending cuts in the upcoming fight over the debt ceiling limit increase. Wasserman Schultz said that the president will not negotiate with Republicans on maintaining the full “faith and credit of the United States.”

“The fiscal cliff deal that we passed last night is one step towards a balanced approach,” Wasserman Schultz said. “Republicans also need to understand that this is now just – not now we’re going to turn to spending cuts only. Anything we do going forward is going to need to have balance – balance in revenue and spending cuts.”