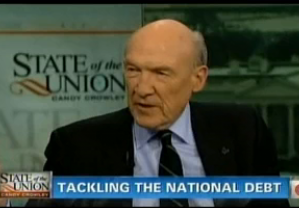 Co-Chair of the recent Debt Commission, former Republican Senator Alan Simpson appeared on State of The Union and unleashed a series of somewhat humorous, always weird jabs at current politicians in both parties who are not taking the deficit problem seriously. Simpson, no stranger to making controversial comments in the past, even called some critics “jerks” for lying about his budget saving plans for Social Security and suggested people don’t “howl and bitch” about a raise in the retirement age.

“The next time you hear any politician . . . get up and say ‘I know we can get this done we’re going to get rid of all earmarks, all waste, fraud and abuse, all foreign aid, air force one, all congressional pensions’ [sticks out tongue and makes noise] that’s just sparrow’s belch in the midst of a typhoon. That’s about six, eight, 10 percent of where we are. I’m waiting for the politician to get up and say, there’s only one way to do this, you dig into the big four, Medicare, Medicaid, Social Security, and defense. And anybody giving you anything different than that, you want to walk out the door, stick your finger down your throat and give them the green weenie.”

What might have been even funnier than Simpson’s random references of “sparrow’s belch” and “green weenie” was host Candy Crowley’s serious tone despite the comic absurdity of some of Simpson’s analogies. Sure deficits are a serious topic, but Candy could have given Simpson an extra chuckle here and there, comedy is hard! And Simpson wasn’t done yet, declaring, “deficit denial is dead as a dodo bird. And if they want to keep playing the violin, well, deficits mean nothing, well, I’ll buy the drinks.”

Maybe Simpson’s willingness to make strange comparisons is just the way to shame current politicians into taking his deficit-reducing proposals seriously? And why not, nothing else has worked so far.