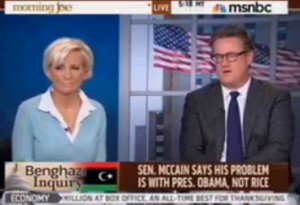 On Monday morning’s Morning Joe, host Joe Scarborough mocked Time magazine’s Joe Klein for his assessment that the September 11 attacks on U.S. diplomatic facilities in Benghazi were not carried out by al Qaeda, and joined panelist John Heilemann in dismissing the 100% true fact that President Obama called the attacks an “act of terror” as a “talking point.”

Scarborough’s prosecution of Klein, in which he repeatedly made the false assertion that Gen. David Petraeus testified that “al Qaeda was involved,” culminated in a laughing reference to Klein as Simpsons Police Chief Clancy Wiggum, who frequently tells Springfield citizens there’s “nothing to see here.”

The segment followed the familiar Joe Scarborough formula, in which the former GOP congressman purchases his influence with an ostensible airing of opposing views, then spends it by making sure the conservative view wins. The problem, in this case, is that these are not matters of opinion, so Scarborough is stacking the deck against the truth.

Klein began by arguing that the information Amb. Susan Rice gave on those Sept. 16 Sunday shows was “absolutely accurate,” that the attack was “a spontaneous demonstration by extremists,” and “not by al Qaeda.”

Scarborough jumped in to cross-examine Klein. “Was al Qaeda involved in this attack or not?”

This is a point that has eluded the media almost since this story began, as the Republican desire to amplify the attack into an al Qaeda operation intersected with the media’s tendency to sex up a story as much as possible. Coverage of the attacks have used a progression of adjectives that began with “al Qaeda-inspired group,” included such non-meaningful terms as “al Qaeda affiliate” and “al Qaeda-linked terrorists,” which somehow ended up in Joe Scarborough’s mouth as simply “al Qaeda.”

In fact, the group suspected of carrying out the attack, and which has admitted participation in it, is one of several dozen al Qaeda “inspired” groups, which makes them about as involved with al Qaeda as a guy tailgating in the parking lot of the Meadowlands is with the New York Jets. According to Foreign Policy magazine, “there are no known formal or operational links” between al Qaeda and Ansar al Sharia, the group believed to be responsible for the attack.

But that doesn’t make as hot a story, so media organizations have exaggerated the link, and Republicans have happily exploited that, posing the Benghazi attacks as a rejoinder to the President’s killing of Osama bin Laden (and so many other terrorists that Republicans started to feel faint over it), and a motive for the administration to “cover up” the tenuous link.

Scarborough went a step further, telling Klein that  General Petraeus “said they knew immediately that it was a terror attack, and that al Qaeda was involved.”

Klein patiently pointed out the difference, that Ansar al Sharia are “militant extremists. Al Qaeda was an organization organized by Osama bin Laden,” which Scarborough mocked as a minute distinction. Klein later explained, “These are people who admire al Qaeda. But did al Qaeda direct this? No.”

What Klein failed to point out, and what Joe Scarborough surely knows, is that Gen. Petraeus testified before a closed session of the House Intelligence Committee, so it is not known exactly what Petraeus said. Scarborough is relying on Republican Rep. Peter King’s account of Petraeus’ testimony, which still doesn’t substantiate Scarborough’s assertion. However, according to additional reporting, it’s likely that Petraeus was referring to Ansar al Sharia, which is definitely not al Qaeda, and, as mentioned above, has no known formal or operational links to al Qaeda.

In short, Scarborough is repeatedly insisting that Gen. David Petraeus said something he did not say. Klein deserves credit for pushing back at all, but he fails badly at calling scarborough out on this repeated falsehood, a flaw that is baked into the Morning Joe coffee cake.

Game Change co-author John Heilemann got into the act, repeating the famous falsehood that President Obama “declined to call it an act of terror” for nine days after the attacks. When Klein protested that he, in fact, had called it an “act of terror,” Heilemann and Scarborough laughed and mocked him.

“Has the President invited you to go play golf?” Scarborough asked. “Because you are just gobbling up the talking points like Thanksgiving turkey.”

MSNBC viewers from other times of day might be surprised to see the facts treated as jokes on their network, but as funny as they are to Joe Scarborough, here are those facts. President Obama called the Benghazi attacks an “act of terror” not once, not twice, but three times in the days following the incidents. Aside from his Rose Garden remarks, the President made this reference to the attacks in a speech later that same day:

As for the ones we lost last night:  I want to assure you, we will bring their killers to justice.  (Applause.)  And we want to send a message all around the world — anybody who would do us harm:  No act of terror will dim the light of the values that we proudly shine on the rest of the world, and no act of violence will shake the resolve of the United States of America.

The President also said this, in a Sept. 13 speech in Golden, Colorado: (transcript via The White House)

So what I want all of you to know is that we are going to bring those who killed our fellow Americans to justice. I want people around the world to hear me: To all those who would do us harm, no act of terror will go unpunished.

Lost in all f this, though, is that Ambassador Susan Rice, supposedly hell-bent on “covering up” any possible link to al Qaeda in order to protect the Obama administration’s shiny terrorist-killing credentials, actually did acknowledge the possibility on one of those Sunday shows, during this exchange with CBS News’ Bob Schieffer:

BOB SCHIEFFER: Do you agree or disagree with him that al Qaeda had some part in this?

The main problem with Ambassador Rice’s Sunday show appearances, then, seems to be whether there was a protest in Benghazi first, which then became an attack. We don’t know all of the facts yet, but it appears that the answer is no, but that perhaps the attack was the protest.

To be fair, Heilemann and Scarborough are simply advancing the same false choice that the mainstream media has played along with for months, that an “act of terror” couldn’t possibly also be a “spontaneous” reaction to something. That word, spontaneous, has become a favorite of Republican Benghazi hustlers, willfully ignorant of the fact that even a trip to the 7-Eleven requires some amount of planning. Folks like Sen. John McCain would have you believe that this attack must have either sprung into existence from the mists, or been some sort of Ocean’s 11 caper that was hatched months in advance. These terrorists had a military base up the street from the consulate; they didn’t need to pull all that much together to do this. “Opportunistic” is perhaps the better descriptor, but spontaneous, in the context of days, not minutes, also works, and it’s what the terrorists themselves called it.

Scarborough finished Klein off by asking, “Who’s the police officer in The Simpsons? Quimby was the mayor. Chief Wiggum. Move along.”

Klein, with a TV gig to protect, could only take the fight so far.

Nobody needs to tell Joe Scarborough that The Simpsons isn’t real, but someone does need to tell his viewers that Scarborough’s “facts” are not. This “cover-up” business is a matter of opinion, albeit uninformed opinion, but what President Obama said, and what General David Petraeus has reportedly said, are matters of record. Joe Scarborough thinks that’s funny, but the real joke is on Morning Joe’s viewers, and the people they influence.