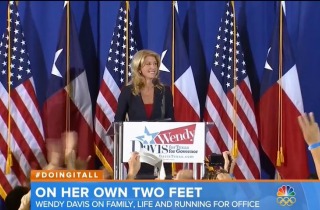 NBC’s Today profiled Texas Democratic gubernatorial candidate and state Sen. Wendy Davis (D-Fort Worth) on Wednesday as part of a regular feature on successful women they have dubbed “Doing it All.” The segment was described by host Savannah Guthrie as one focused on “giving advice for women on tackling today’s challenges.”

“One woman who knows them all too well is Democratic Texas state Senator Wendy Davis,” she continued.

Maria Shriver noted that Davis became a national political figure when she stood 11 hours “in her pink tennis shoes” to postpone the passage of a restriction on abortions in Texas after 20 weeks of gestation and the augmentation of health standards in clinics.

“I’m not an overnight sensation,” Davis countered. “I am the epitome of hard work and optimism.”

The profile piece goes on to profile her young life, her teenage pregnancy, her divorce, and eventual rise to state-wide prominence. Davis took Shriver back to the small house where she grew up – humble roots which she says are always in the forefront of her mind.

“Is Wendy Davis more of a national star than a Texas star?” Shriver asked a local political reporter who told her that she is an international celebrity. However, the conservative nature of Texas means that this “celebrity” does not directly translate into votes.

“What difference do you think it will make if you’re the governor here,” Shriver asked Davis in front of the Austin statehouse.

“It has been a long, hard road for Davis to have her voice heard,” Shriver concluded. “Her story is certainly an example of what a strong education can offer women and men everywhere.”