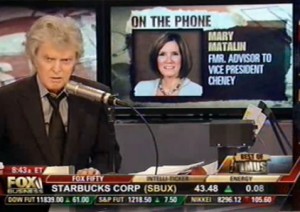 Fox Business Network played an Imus In The Morning highlight reel on Monday, which included a clip of Don Imus talking to Republican strategist Mary Matalin about the 2012 election and primary season. In a wonderfully dated reference, he first made Matalin talk with a Herman Cain impersonator, before moving on to who the nominee for the Republicans was going to be.

“Anyone who tells you that they know,” she said, “is blowing hot air.”

Imus then asked if she thought Newt Gingrich could beat President Obama.

“You think you’re a man of the people, but you’re detached,” Matalin shot back.

The two then talked about Rick Perry and Mitt Romney, which prompted Matalin to point out that the eventual GOP candidate will be more about the message than the actual person. She did say, however, that even if the nominee can’t “walk and chew gum,” the voters will balance out a Barack Obama victory with a Republican majority in the Senate and House. Imus, certain that Romney is the only candidate who can beat President Obama, offered to place a wager with Matalin on the outcome.

“Can I pick the charity?” Matalin asked.

Watch a clip of the interview below, courtesy of FBN: