Don Imus To Rep. Weiner: ‘Don’t Be Mean To Me Like You Are To Megyn Kelly’ 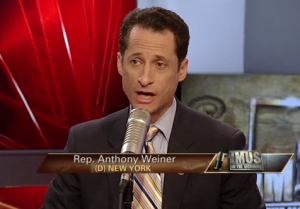 Don Imus noticed that every time Democratic Congressman Anthony Weiner appears on Fox News Channel, “he’s screaming at some Fox host – that poor little Megyn Kelly or that whack-job, my friend Sean Hannity.” Weiner demonstrates here on Fox Business Network, that even when he’s not screaming he can still be very entertaining.

Regarding his legendary shouting matches with Kelly and Hannity , Weiner said “I come on when I’m invited, and I fight back. They’re used to having people roll over and that’s not my style.” On the issue of Libya, Weiner didn’t want America to lead the effort, but was not opposed to America being involved and suggested “what’s the purpose of being a powerful country if we’re not using it to defend people?”

Yet the conversation became most enjoyable when Weiner and Imus debated Obama’s job performance. Weiner thought Obama was doing a great job and that Secretary of State Hillary Clinton was extraordinary. Imus expressed a different opinion: “I like her – sorta – but you can’t possibly – I mean he’s a nice guy but you can’t believe he’s a good President? I mean he’s in so far over his head it’s like a Jacques Cousteau deal.” Not to be outdone in the comedy department, Weiner later mocked the Fox Business slogan of “The Power to Prosper,” firing back at Imus that he will be “monitoring Fox Business throughout the day because it’s the power to perspire or something like that.”

Despite Imus sarcastically calling Weiner a “jerk” and Weiner declaring “only on a Fox outlet would you get the President being blamed for the earthquake and tsunami that knocked out nuclear reactors in Japan,” it seems Weiner finds a way to have fun with each of his Fox appearances that always leaves viewers entertained.