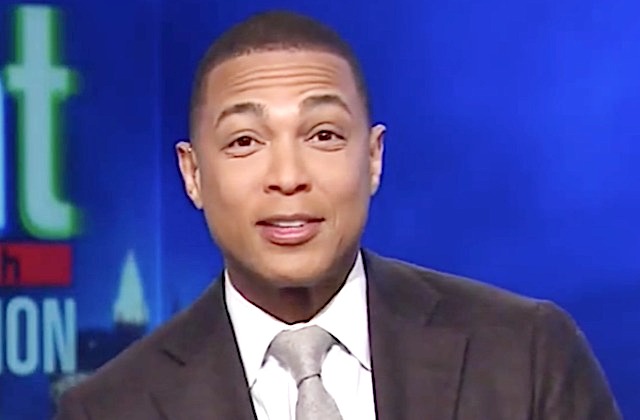 Tuesday night in Arizona President Donald Trump attacked the mainstream media to the raucous cheers of his faithful supporters who attended a rally designed to rejuvenate his stalled political agenda.  When he singled-out CNN as the object of his disdain, the crowd began a spontaneous “CNN SUCKS!” chant the reverberated against the halls of the Phoenix Convention Center which was packed with supporters who stood in triple-digit heat to get into the hall. (Side note: Remember when Hillary Clinton spent $2,000,000 on an ad buy in Arizona two weeks before the election last year?  Those damn Russians!)

Don Lemon took the reins of the network’s coverage immediately following the rally and he immediately validated the president’s harsh words. “What do you say to that? Lemon rhetorically asked. Then, after taking a dramatic pause he confessed to his viewers “I’m just going to speak from the heart here.” He then went on to say that “what we have witnessed was a total eclipse of the facts,” and called the president “someone who came out on stage and lied directly to the American people.”

He called Trump “unhinged” and said “his speech was without thought, without reason, devoid of facts, devoid of wisdom.”

The entire monologue was delivered while the music from the rally still played int he background and, amusingly, the unintended soundtrack was the Rolling Stones’ You Can’t Always Get What You Want, and one can be forgiven to think that the song resonated with Lemon and his colleagues still angry that Trump made them all look like fools on election night last year.

“What we have witnessed was a total eclipse of the facts,” CNN’s Don Lemon says after Trump’s rally in Phoenix https://t.co/KxdoNGxO2v

Lemon’s final words tell you everything you need to hear to fully understand and appreciate those of us who actually joined in the “CNN SUCKS” chant in our living rooms across this country. He said Trump was “a man clearly wounded by the rational people who are abandoning him in droves, meaning those business people, and the people in Washington now who are questioning his fitness for office and whether he is stable. A man backed into a corner, it seems, by circumstances beyond his control and beyond his understanding.”

But here’s where Lemon confirmed everything Trump said about his network. He finished that assessment of the Trump speech with this: “That’s the truth.”

Journalists (especially the ones who turns wear pancake make-up and read teleprompters) revere Walter Cronkite and Edward R. Murrow. They pine for the days when Americans only had three networks to choose from for their electronic news which forced Uncle Walter into the role of “the most trusted man in America.” But even with that level of power and influence, Cronkite would never have concluded one of his reports (whether it included his opinion or not) with those words. “That’s the way it is” is not the same as “That’s the truth.”

As the jubilant crowd screamed “CNN SUCKS!” with joyful abandon one has to wonder what went through the minds of the executives, producers, anchors and reporters who work at the outlet. One doubts there were fist bumps and high fives all around as shouts of “we did it!” and “mission accomplished” rained down through the newsrooms in Atlanta, DC and New York. They can’t be happy about this, can they?

And yet, they sent Lemon out there to speak for them and he delivered the Democratic Party’s response to the President far more passionately and in a far more telegenic way than Nancy Pelosi or Chuck Schumer ever could. This is the choice CNN has made. They have expunged from their airwaves and voice that is even remotely sympathetic or positive toward the president and they’ve put their reporters and anchors in the position to analyze, criticize and attack the administration and anyone who would dare to speak on behalf of the millions of voters who still support the president.

And so the cycle continues. Trump will be Trump. He will not behave as any president before him, just as those who voted for him expected. CNN and most others in the media will spend hours complaining about him and creating round-table panel discussions to analyze whether Trump will be impeached or his fitness to command will be challenged with the invocation of the 25th amendment.

CNN’s ratings will continue to plummet lower than “Nick at Nite” while even MSNBC figures out that 24/7 coverage of Trump hate does not make for a successful business model. After all, while CNN fires every last voice on their network who can provide a perspective that represents nearly half of the American people, MSNBC appears to have a real interest in letting those voices be heard. They’ve brought in several intelligent voices from the right to participate in panel discussions and I can tell you from personal experience those voices are given time and respect by the anchors and producers.

MSNBC has even recently given Hugh Hewitt a weekend talk show while CNN continues to be a rancid echo chamber with seemingly no voice in the newsroom who can stand up and provide the Trump voters’ perspective without being shouted down, ridiculed and demeaned.

Until they can figure out a way to objectively report and analyze this president or, at the very least, give a welcoming environment for pundits and analysts who can provide an alternate perspective on the Trump White House without getting screamed at by Ana Navarro, they’ll continue to be a punch line for the president, and even worse, for the millions of people who laugh along with him.