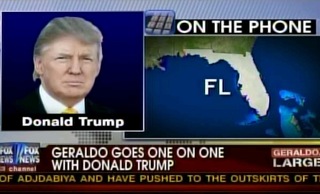 Donald Trump better hope Dr. Orly Taitz, D.D.S., Esq., stays away from the 2012 Republican presidential field, because barring a second fifteen minutes for the infamous frivolous lawsuit filer, Trump has solidified his position as 2012’s official birther candidate. Visiting Geraldo Rivera tonight, Trump insisted that, hope as he may that President Obama was American, “we shouldn’t have to be talking about the word hope.”

Asked about his comments on The View over the phone, Trump said, once again, that “the fact is that we haven’t seen his birth certificate,” arguing that the short-form certificate the President showed was “some document” that didn’t confirm anything. “I always give my credentials,” he told Rivera, “I like to give credentials. I’m a really smart guy. I’ve always been a really smart guy,” noting that he had god to “one of the best” schools in the world, apropos of nothing. Given all these facts about how smart he was, he told Rivera an anecdote of his day at the office. “I asked to see my birth certificate,” he narrated, and within minutes, it magically appeared.

Besides the absence of a birth certificate, Trump argued that the President “spent a lot of money to keep this out of print,” and that “he could end the whole controversy” simply by showing the document. Rivera, somewhat stunned, brought up George W. Bush‘s birth certificate, and asked whether Trump had seen it. “No, but I’m sure he has one,” Trump replied. He also noted that some of his conservative friends had tried to swerve him away from the birther issue, to which he repeated replied, “why not?”

This, of course, comes after several media appearances where The Donald has questioned the President’s citizenship, and comes in light of a birther renaissance that seems to have begun earlier this month with Trump and Sean Hannity. If Trump’s objective here is to out-crazy the rest of the 2012 GOP field– a field that currently includes but is not limited to Rep. Michele Bachmann and Herman Cain— we’re in for quite the election season.