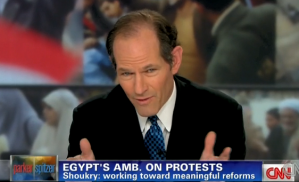 “You had journalists from every major organization being harassed, arrested, taken up and picked up off the street last week at the direction of the government. Who is going to say we are responsible for that?”

Shoukry claimed any harassment was “deplorable,” however, suggested that the amount of such occurrences was exaggerated since most journalists were able to conduct their job without a problem and since some others lacked any credentials to prove they were journalists. Spitzer responded, “I say this with all due respect, but your answers simply defy credibility.” Spitzer refuted the notion that journalist harassment was isolated when, in fact, he claimed it was an orchestrated effort by the government of Egypt and that “fear and crisis is being created by the government, not by the peaceful protesters.” Shoukry dismissed Spitzer’s argument and warned that it’s “very easy to make broad allegations without substantiation.”

The tense back and forth between the two attorneys was gripping and although Shoukry was unwilling to give much ground or make any news, it was still interesting to hear him respond to Spitzer’s tough questioning which included such pointed challenges like “is Egypt not ready for democracy or is the military not willing to give up its power?”