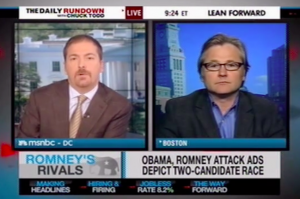 Eric Fehrnstrom, one of Mitt Romney’s top advisers, appeared on MSNBC today, where he discussed a range of topics about the campaign. Among them was his response to those who say Romney needs to disclose more of his financial history — which President Obama‘s campaign has used to its advantage. Dismissing the issue’s significance, Fehrnstrom said the Obama campaign has “more sideshows than P.T. Barnum’s traveling circus.”

Host Chuck Todd pointed to a Washington Post story that indicated some portions of Romney’s “personal financial history that are essentially going to stay cloaked.” Acknowledging the campaign is following the “right of law,” Todd asked, “But are you following the spirit of what presidential campaign candidate have done in the modern era of releasing more details, more tax returns, than what you’ve released?”

RELATED: Is The Obama Campaign Watching You Online?

Well, look, you know the governor has provided all of the disclosure that’s required by law. And that is significant. But then he’s gone one step further than that, and he’s voluntarily put forward hundreds of pages of tax return information for you and your colleagues, and the press and members of the public to go through. Look, we know that there’s going to be an extraordinary effort by the obama campaign to distract from the bad economy. I got to tell you, they got more sideshows than P.T. Barnum’s troubling circus, but it’s not going to work because people care about the state of the economy. They care about gas prices. They care about their homes and staying in their homes, and that’s what this election’s going to come down to, Chuck.

The information they’ve disclosed so far, Fehrnstrom said, is “sufficient.”