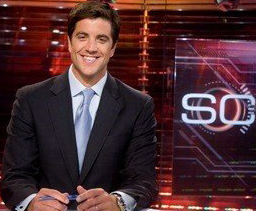 The change in the high profile news reader’s role–Chang has been given a role as correspondent and “occasional” fill-in anchor at ABC’s Nightline–is the latest in a string of staffing changes at GMA since Sherwood was named president in December. Sherwood, a former executive producer at GMA, has made the morning show a high priority in the first months of his tenure. Last month, Sherwood named Nightline’s James Goldston to the post of senior executive producer at GMA, choosing one of the network’s top performers for the critical role of closing the gap between ABC and NBC in the mornings. “I think GMA is in a strong position,” Goldston told Mediaite after the February announcement. “The show is ready to roar.”

Since then, ABC has added former NBC chief legal analyst (and Mediaite founder) Dan Abrams to GMA as legal analyst, and bringing back Lara Spencer.

Here’s Sherwood’s memo on the hiring of Josh Elliott:

I am pleased to announce that Josh Elliott will join ABC News in the coming weeks as Good Morning America’s news reader.

Many of you know Josh’s excellent work at ESPN where he co-anchors SportsCenter for three hours every weekday morning from nine to noon eastern.

After graduating from the University of California-Santa Barbara and earning a master’s degree at Columbia University’s Graduate School of Journalism, Josh landed his first dream job at Sports Illustrated. For six years he distinguished himself at SI covering major events across the world, reporting on the NFL and interviewing athletes including Tiger Woods, Michael Jordan, Henry Aaron and Pele.

In 2004, Josh joined ESPN as a panelist on various shows, working as a guest-host on Cold Pizza and contributing regularly to ESPN The Magazine and ESPN.com. In 2008, he was named co-anchor of SportsCenter with Hannah Storm when that storied show went live in the morning.

Josh’s curiosity and travels are far-reaching and his journalism has taken him around the world. While on assignment in the United Arab Emirates, for instance, he reported on the outbreak of the 2003 US invasion of Iraq.

In addition to his impressive professional background, Josh is a swimmer and water polo player, avid Dodgers and Lakers fan and, most important he would say, a father to his young daughter.

A talented writer, storyteller and live broadcaster, Josh will be a great addition to our team at GMA.

Please join me in welcoming Josh to ABC News.