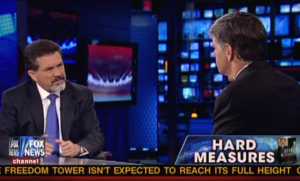 On Sunday, Jose Rodriguez, former head of the CIA’s Clandestine Service, defended the use of “enhanced interrogation techniques” used, following 9/11, to attempt to collect information. On Monday night, Rodriguez sat down with Sean Hannity, detailing some of the techniques he’s used. He further added that without these methods, President Obama likely wouldn’t have had a successful Osama bin Laden mission.

He told Hannity — who played a clip in which Nancy Pelosi denied knowing about the CIA techniques — that he personally briefed Pelosi on the matter. So, she was either confused or lying, Rodriguez said.

Following 9/11, he said, they were very concerned about a second wave of attacks, and there was confirmed intelligence about threats such as anthrax. There was a time bomb “and we could hear it ticking,” he said. Rodriguez recounted the capture of Abu Zubaydah. Regarding his “dark side” comment, Rodriguez said, “we operate in the shadows.”

Hannity then asked him to walk us through the techniques. There are 10 approved techniques, Rodriguez said. “They’re pretty wimpy,” he said. For example: grabbing somebody, bringing him close to you, looking him directly in the eye. Another one is the “insult slap” — but it’s with an open hand, so as not to hurt them, he said. “They’re naked?” Hannity asked. In most cases, yes, he replied. There’s also sleep deprivation and food deprivation (or “caloric reduction intake”).

Rodriguez himself said he used waterboarding on three people: Ammar al-Zubaydi, Khalid Sheikh Mohammed and the man responsible for bombing the USS Cole. Hannity said, “So what you do is put them sideways and cover their mouth and their nose and pour water on them. You can only do it for?”

“Forty seconds is the max,” Rodriguez said, but 10 seconds is the average. Hannity then went on to note that Obama has called this method torture. He then asked, “The president is now taking credit for getting bin Laden. If he had his way of closing Gitmo and ending enhanced interrogations […] would we have gotten bin Laden?”

Rodriguez went on to say, “What concerns me, there is still doubt out there. People are doubting the amount of information that we got from these programs that gave us the basis to go after Al Qaeda, and destroy Al Qaeda, the Al Qaeda that attacked us on 9/11, is amazing.”

There’s “a clear trail” from the detainees to the intelligence about bin Laden, he said.