People can surprise you, sometimes in good ways, and sometimes not. On Tuesday morning, they did both for me, as I became aware of the story of an Iowa businessman who allegedly shamed some homeless people by offering them a job, then followed them around with a sign telling people not to give to them because they had refused his offer:

My Uncle Mike offered these guys a job said he was busy right now could use the help they said no so he did this !! Wow don’t give these guys any money 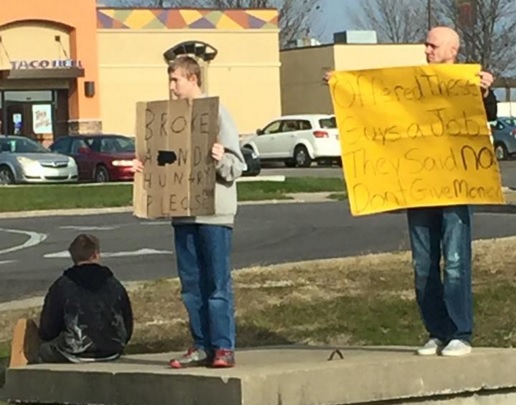 That Facebook post quickly went viral, and drew the attention of Fox and Friends, who teased the story all Tuesday morning before asking the frequently strident Laura Ingraham to weigh in. Her response was not what I expected:

“I don’t know if this guy has mental health issues. But for the grace of god go I. I mean, about 50 yards from where I am right now, there are about 75, 80 people lined up to get in to have breakfast. Homeless people. Right in the shadow of the U.S. Capitol. I don’t know their back stories. I’m not about shaming them. I mean, I see the point, you know, we want people to get jobs. But, it might not be, in every individual circumstance, as simple as that. So, maybe I’m a softy but I’m not sure I would have done that.”

Ingraham’s compassionate response nearly brought a tear to my eye.

The story has been picked up and rocketed around the internet, despite the fact that nobody has bothered to verify any of the story, or even find out the guy’s name. The story was posted by the business owner’s nephew Mike Woolridge, who only identified him as his “Uncle Mike.” My first impulse was to agree with Ingraham, that whatever the situation, shaming homeless people before the entire world is kind of an asshole move.

As it turns out, though, the man in the photos sort of agrees with that, too, and says it wasn’t his intention for the photos to go viral the way they have. I spoke with Mike Pothoff, who owns a car wash and detailing business in Muscatine, Iowa, on Tuesday morning, and he told me that he’s not at all pleased with the attention his act has gotten.

“This is not what I wanted,” Pothoff said. “That was not my intention. My nephew said, ‘I wanted to take a picture of me standing there with the sign because I told my dad I was gonna do it,’ but then it got on… Facebook blew up, and I told my nephew I didn’t want to be on TV or anything, or get interviewed for it, that’s not why I did it.”

But he’s all set to do a remote hit for Fox and Friends Wednesday morning because, he says, “now there’s people saying really bad things about me, like I was offering them sexual shit, so now, I just want people to hear exactly what I did.”

Pothoff explains that he first approached the two men in the picture about six weeks ago, and again over the weekend, and offered them jobs. “We’re not from around here,” he says one of them told him, and when Pothoff persisted, they smiled and gave a string of what he viewed as pretextual excuses.

Pothoff even gave them job applications that he ad already written “Hired” on. The encounter that made it all over Facebook lasted all of two minutes, he says.

Pothoff said he isn’t cold to the truly needy, even panhandlers. “We had a guy in Muscatine years back, he passed away in the last few years, he never had any legs, he was in a wheelchair and he was panhandling, I gave him money. I understand. I’m sure he went to alcohol, but I’d probably be depressed and alcoholic too if I never had no legs, I don’t mind giving money to people that need money.”

Mr. Pothoff says he videotaped an encounter with another panhandler on Sunday, but hasn’t published the footage yet. Someone called him to tip him off that there was a panhandler out there, so Pothoff says he went down and offered the man a job, but the man turned him down because he has diabetic foot complications.

Mr. Pothoff isn’t so sure he’ll be putting up that video because “I’m getting enough smack about this, nobody knows what I offered these guys,” adding that he’s opening a family fun center in Muscatine, and that he hopes to “hire mentally-challenged people at my place, let ’em sweep or whatever if they want to have jobs, I do it at my car wash right now. I’ll help anybody out.”

He says he’s looking to channel his energies into some sort of volunteer or charity work for women and children who can’r afford Christmas gifts.

Asked if he worries that the popularity of these photos could have the unintended effect of demonizing truly needy people, Mr. Pothoff said that he had gotten positive feedback from a disabled woman, who told him that she appreciated his actions, that she would “love the opportunity to have a job.”