FBN: How Do These ‘Incoherent’ Occupy Wall Street Protesters Get Their Crazy Ideas? 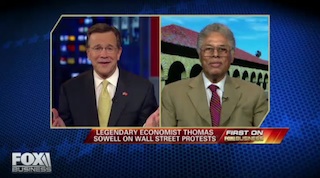 If it weren’t so depressing, it would be almost funny how quickly the “objective” cable news channels have fallen into line in their coverage of the Wall Street protests. On MSNBC, the protesters are heroes. On Fox News, they’re raving psychopaths. And, while we seem to already have thousands of examples of the networks in lock step formation, here’s another one courtesy of Fox Business Network! You know, just for fun!

The clip in question features FBN’s David Asman talking to economist Thomas Sowell and the basic tone of the segment can be summed up as “What’s the deal with those crazy crazies and their crazy ideas? They are cur-raaaaazy!” It begins with Asman saying that the protesters reminded him of the talk of “complaining classes” and “parasites” in Sowell’s new book. Sowell agreed, wondering how the protesters had enough money to just “hang around in parks.” This got a good, hardy chuckle out of Asman who thought it was amazing that these “anti-capitalist” protesters would dare (DARE) to use cell phones.

“The thing that strikes me the most is, whenever they’re interviewed, they are incoherent. They will toss out a few scraps of rhetoric and they’ll feel that they said something. But they can’t tell you exactly what they want, they can’t tell you what they’re complaining about other than the world is not built to their specifications.”

Right now, there’s an interesting column from John Wilson up on our site entitled “Occupy Wall Street: GOP Is Making Similar Mistake As Democrats Did With Tea Party”. Watching segments like this one on the Fox channels, you can’t help but agree with him. Everyone in this clip is just so damn smug. It’s no surprise that the clip is now rocketing up Reddit. And that’s certainly not because people agree with the sentiments displayed.

So, Fox News and FBN are blindly demonizing the protesters while channels like MSNBC are blindly supporting them. I hope everyone has extra pairs of pants, because someone’s going to get bit in the ass. Hard.

Watch the clip from FBN below: