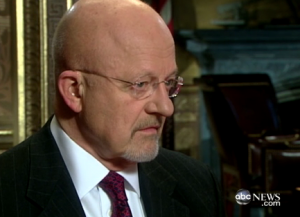 Gen. James Clapper is the guy who’s tasked with coordinating everything the nation knows about terrorism and national security. It’s a huge task, and the job requires a certain kind of mind–you know, the kind that soaks up details and stays on top of the latest important events.

So it’s perhaps somewhat less than comforting to watch Diane Sawyer‘s revealing interview with our nation’s top terror team and see Clapper appear to know less about the arrests of 12 people in London as part of a potential holiday terror plot than anybody who, say, watched Good Morning America that day as they got the kids ready for school.

When Sawyer asked about London, and “how safe is it? Any implication that it was coming here? Director Clapper?” She gets the worst of all answers from a top intelligence figure (who’s still in their job): “London?”

Sawyer–who kindly let Secretary Janet Napolitano‘s gaffe about America’s anti-terror forces being on the job “24/7, 364” slip without calling her on it, did not let this one go–and rightfully so:

SAWYER: I was a little surprised you didn’t know about London.

Well, that should make us all feel better. The pause and utter lack of comprehension on Clapper’s face is the very reason why television news exists. Pictures do tell the story.

After the interview, Clapper’s office–in fast-moving damage control–issued a statement to ABC News:

“The question about this specific news development was ambiguous. The DNI’s knowledge of the threat streams in Europe is profound and multi-dimensional, and any suggestion otherwise is inaccurate.”

UPDATE: After suggesting that the problem wasn’t sheer ignorance, but rather Diane Sawyer’s “vague” question, the office of the DNI now admits Clapper, essentially, had no clue about what had happened in London. Details here.