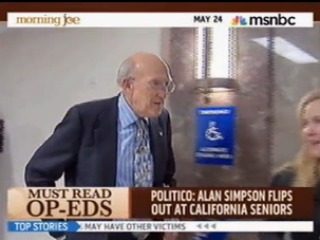 Former Wyoming Senator Alan Simpson, the current chairman of the National Commission on Fiscal Responsibility and Reform, flipped out at California seniors over a flyer entitled “Bowles! Simpson! Stop using the deficit as a phony excuse to gut our Social Security!”

RELATED: Alan Simpson: The GOP ‘Won’t Have A Prayer’ With ‘Homophobic’ Rick Santorum

In a rather colorful letter dated April 6th, Simpson urged the group to “read the damn report” on Social Security, dubbing them “greedy geezers” for using people as a “tool and a front for your nefarious bunch of crap.”

To Whom It May Concern:

Erskine Bowles and I thoroughly enjoyed our time on the West Coast and received an excellent reception from folks — at least those who are using their heads and have given up using emotion, fear, guilt or racism to juice up their troops. Your little flyer entitled “Bowles! Simpson! Stop using the deficit as a phony excuse to gut our Social Security!” is one of the phoniest excuses for a “flyer” I have ever seen. You use the faces of young people, who are the ones who are going to get gutted while you continue to push out your blather and drivel. My suggestion to you — an honest one — read the damn report. The Moment of Truth — 67 pages, and then tell me if we’re not doing the right thing with Social Security. What a wretched group of seniors you must be to use the faces of the very people that we are trying to save, while the “greedy geezers” like you use them as a tool and a front for your nefarious bunch of crap. You must feel some sense of shame for shoveling out this bulls**t. Read the latest news from the Social Security Trustees. The Social Security System will now “hit the skids” in 2033 instead of 2036. If you can’t understand all of this you need a pane of glass in your naval so you can see out during the day! Read the report. Get back to me. My address is below.

If you don’t read the report, — as Ebenezer Scrooge said in the Christmas Carol, “Haunt me no longer!”

Morning Joe host Joe Scarborough that Simpson was “set off” when “yet another senior citizens group” accused him of showing pictures of young people on the cover of the report, “which, of course, is perverse.”

Have a look at the Morning Joe crew’s response to Simpson’s letter, via MSNBC: