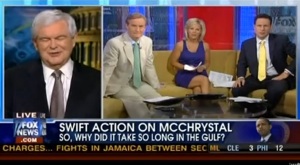 Really? Former Speaker of the House, and current Fox News Analyst Newt Gingrich made a guest appearance on Fox and Friends this morning, and was asked by co-host Gretchen Carlson to opine on any correlation between President Obama‘s quick replacement of General McChrystal and his inability to stop the BP oil disaster, currently in its 67th day. Again…really? Yes really.

The following clip opens with Brian Kilmeade teasing the following segment with the question of “why its taking the President months to plug the leak” when he replaced McChrystal so quickly. Coming out of the break, Carlson presented the oddly far-fetched syllogism thusly:

Remember that the Rolling Stone article that started a firestorm comes out today officially even though we’ve been talking about it for a couple of days. In the week that the media has covered it, the president has summoned and fired General Stanley Mcchrystal as commander in Afghanistan and replaced him, of course with David Petraeus. It’s been 67 days since oil started leaking into the gulf so many now wondering why it’s taking so long to fix that spill. Former speaker of the house, Newt Gingrich joins us from Washington with his thoughts. good morning to you, Speaker. So you see any correlation between the two? Is it fair to draw a correlation between the two?

Somehow because Obama has been decisive in replacing McChyrstal in Afghanistan, this is evidence that he hasn’t been quick to try to resolve the oil disaster in the Gulf. Fortunately Gigrich laughs off the remarkably absurd question and explains things in a much smarter and broader context.

There are lots of real reasons to criticize the Obama administration for their handling of the BP oil disaster, but this is not one of them. By a long shot.