Fox & Friends Gets Schooled By A Priest: ‘You Guys Look So Angry About This War On Christmas’
Video

Fox & Friends Gets Schooled By A Priest: ‘You Guys Look So Angry About This War On Christmas’ 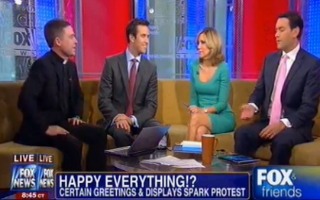 When the folks over at Fox & Friends invited Father Jonathan Morris on to discuss “The War On Christmas,” I’m guessing they didn’t expect he would lecture them on Christmas peace and happiness, rather than focusing on the alleged “war,” which he called “silly.”

Co-host Clayton Morris began by saying, “Jesus Christ is the reason for the Christmas season but across the country, nativity displays being nixed and Christmas trees being called holiday trees instead.” Alisyn Camerota then teed up the segment, stating, “I’m going to bet that Father Jon, our religion contributor, has some thoughts on this. Are you…do you just gear up for War On Christmas?”

Apparently not. Before he began speaking, Dave Briggs foreshadowed the rest of the segment, telling Father Jon, “I’m not feeling ‘angry’ from you now.”

“The reason I’m not angry is that, yes I think it’s silly, it’s out of place for people to dedicate so much energy to try to get rid of Christmas scenes like this. The good news is when Christianity has been persecuted, when it has been outlawed, when people have died for this faith, it hasn’t gone away. And everybody has an opportunity to make sure that their faith does not go away in this Christmas season and to live that faith as a family, as a community.”

Father Jon did say he believed there were “a very small percentage of people who are working to try to get rid of these public expressions of faith” but felt the answer was simply that “we should speak up.” “That’s why I’m doing it, that’s why I think it’s important that we have these stories to show what they’re trying to do, but without losing the peace.”

He then offered up his most memorable line of the segment, which might have been directed at the Fox & Friends co-hosts: “If our Christmas is going to be all about getting upset at people who are to trying to away our Christmas, isn’t that silly, too?”

Morris tried to re-direct Father Jon’s attention to the pressing issue at hand, bringing up a recent Rasmussen poll which found that 68% of Americans prefer to say “Merry Christmas,” as opposed to 23% that prefer to say “Happy Holidays.” Father Jon responded that he was happy to hear “Happy Hanukkah,” too.

It would be an offense if we were saying as a country, as a government, in our courts, the only public expression of religion should be Christianity because most Americans are Christian – that is not the American way, but the American way is not ‘let’s pretend that we are all the same and because we are so sensitive we want to make sure that nobody has a public expression.'”

The co-hosts and Father Jon wrapped up the segment discussing whether expressions of religion outside the home, such as Christmas trees in public squares or town halls, should be considered problematic. Father Jon didn’t believe so, saying,

“The courts have repeatedly said as long as you are open also to symbols of other religions, that is a very appropriate thing to do based on the tradition of that community. If there’s a small town in the U.S. that is 90& Muslim, they should have the right..in their.. at their courthouse to have an expression of their Islamic faith, absolutely, for sure. The courts have said as long as we’re not establishing one religion or another, the free exercise of religion – the other clause – needs to be protected, and that means allowing people to have public expressions of their belief.”

The co-hosts didn’t seem quite sure how to respond, with Briggs simply stating, “That’s great.”

Father Jon wrapped up his guest spot by offering some analysis the hosts probably could have done without: “You guys look so angry about this War on Christmas, you guys can tell.”