Fox & Friends On Biden’s Union Speech: ‘There He Goes Again…’ 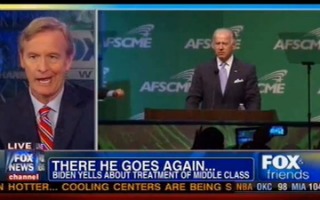 On Wednesday, the folks at Fox & Friends took a look at Vice President Joe Biden‘s speech to a gathering of the American Federation of State, County and Municipal Unions. During the segment, the show’s chyron read “There He Goes Again… Biden Yells About Treatment of Middle Class.”

“We’re talking about the current vice president of the United States, Joe Biden,” said host Steve Doocy. “You know, he’s a rich guy. and we know that he went to two fundraisers yesterday for, you know, costs $500 for one and $1,000 for the other so it wasn’t, you know, aimed at the middle class, per se. You got to go to the upper class to get money like that. Nonetheless, yesterday, on that stage, the Vice President was sticking up for the middle class in a big way.”

RELATED: Vice President Joe Biden Had A Super Soaker Fight With Children At A Picnic Yesterday

As Brian Kilmeade pointed out, Biden has an uphill battle in garnering the AFSCME’s support given that the organization announced last week that they are “not going to be putting this much money into the Democratic cause; we’re going to focus on our membership.”

“Yeah, he was ginning up the crowd,” added Alisyn Camerota. “There was a lot of cheering and he was basically saying, look, the Republicans are the people who want to cut your schools and your streets, and we recognize your values. He was pitting the public unions and union employees against Republicans and it did seem to be red meat for the crowd.”