Fox & Friends Takes On 60 Minutes, Others Over Ryan Coverage: ‘What’s Wrong With Being An Ideologue?’
Video

Fox & Friends Takes On 60 Minutes, Others Over Ryan Coverage: ‘What’s Wrong With Being An Ideologue?’ 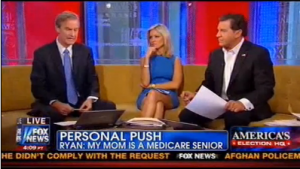 On Monday morning, the hosts at Fox & Friends took on 60 Minutes‘ recent interview with Mitt Romney and his newly-announced running mate, Paul Ryan.

“What’s interesting, though,” Steve Doocy pointed out,” is CBS actually cut out of the report where Paul Ryan talks about how his own mother lives in Florida and is on Social Security. That would be really important for them to have played, but they didn’t.”

“It was interesting,” interim host Ainsley Earhardt added later, “that if you watched 60 Minutes, you know, you had like a 20 minute piece here, a 20 minute piece here on the Congo and whatnot, and then their interview was a lot shorter. Now, granted, 60 Minutes is produced well in advance and so when this announcement came out on Saturday, then they have the interview on Sunday… So they couldn’t play it all, but it’s interesting what they decided to play and then leave out.”

Eric Bolling then shared his notes on what different hosts and pundits have been saying about Romney’s selection of Ryan.

“I find it interesting, he shared, “that 60 Minutes played about 15 minutes or so of that when they could have gone the full hour. I’m sure they would have rated better had you stuck with that for the hour.”

“Candy Crowley from CNN,” he continued, sharing his notes. “Here is a quote that is baffling. Some sort of ‘ticket death wish,’ she said. How about Andrea Mitchell on MSNBC. ‘Not a pick for women.’ I mean, are they just skewing the whole dialogue already? They’re pushing the debate further left? They’re taking Paul Ryan apart before anyone even understands who he is. I mean, they’re muddying the waters before the thing even gets started.”

Doocy then added that “one of the important things that the Romney people are trying to do is they’re trying to define Paul Ryan before the Democrats get the chance to kill him. One of the things the Democrats are saying is Paul Ryan has this risky Medicare plan and, you know, if you’re a senior, they’re going to change everything for you. First of all, Paul Ryan’s plan, if you’re currently on Medicare, you would not be affected by it. It would only impact people who are 54 and younger going forward. But here is the reason that doesn’t even matter, is because Mitt Romney is not going to run on the Paul Ryan plan. Mitt Romney is going to run on his five-point plan, which we’ve been telling you about for the last couple of months.”

“One more, quickly,” Bolling added. “David Axelrod was on the weekend talk circuit and he said, he called Paul Ryan ‘a right-wing ideologue.'”

“what’s the matter with being an ideologue?” asked Doocy. “I mean, an ideologue means you stand for something.”