Fox Guest Counters Reid’s Allegations: ‘For The Past Ten Years Harry Reid’s Been Beating His Wife’ 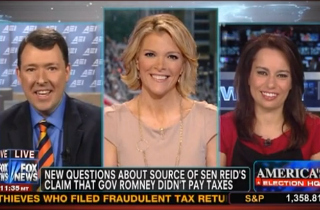 “What does ‘the word is out’ mean?” he continued. “He admits he doesn’t have any proof. In fact, this is the quote: he said, ‘Do I know that that’s true? Well, I’m not certain. But I don’t think that the burden of proof should be on me, the burden should be on him. He’s the one I’ve alleged has not paid taxes.'”

Kelly then asked liberal guest Roginsky: “If somebody called you up and told you ‘I believe the guy didn’t pay taxes for ten years,’ would you then repeat that on the airwaves?”

Roginsky responded first by attacking Thiessen’s point: “Go back to Marc’s point about Harry Reid and beating his wife. If there were police records existing about Harry Reid and he didn’t want to release them, then, yeah.” After Kelly pressed her for an answer, she responded, “I think politically it’s a brilliant move on Harry Reid’s part. Is politics fair game? No. Is Harry Reid doing something as a Democrat? Of course.” She then added that the burden of proof is on Romney to disprove the allegations.

Thiessen then agreed that Romney should release more tax returns, but added that Reid is among senators who recently refused to release their own tax records. “What is in those tax returns? I’d like to know. What the heck, let’s speculate. Is he taking money from corrupt casino moguls? Is he on the take from the Las Vegas mob? The word is out that Harry Reid is corrupt. I have no evidence whatsoever that Harry Reid is corrupt, but I’ve made the accusation. Let him prove that I’m wrong.”