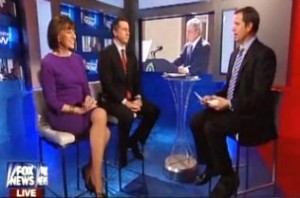 A Fox News Channel panel exploring the media’s reaction to the opening of George W. Bush’s Presidential Library on Thursday tore into what they characterized as the scornful reaction to the day’s events displayed by a variety of MSNBC hosts and The Daily Show host Jon Stewart. The panel mocked the simplistic and disdainful analysis of why the Bush presidency is being viewed in a more positive light by a growing plurality of Americans.

Fox News anchor Jon Scott noted the incredulous reactions that both Stewart and MSNBC host Rachel Maddow showed towards the general display of respect towards Bush at the opening of his library.

Scott noted that Stewart called the library the “Hard Rock Café of catastrophic policy decisions.” He added that Maddow had likened the opening of the Library on the decennial anniversary of the declaration that the mission in Iraq had been accomplished to the strategy employed by Carnival Cruise Lines in downplaying the significance of the “poop cruise” – hoping that the American people have short memories.

National Review editor Rich Lowry said that the media generally scorned Bush when he occupied the Oval Office and they display scorn for him now.

“The phenomenon that Jon Stewart pointed out to is a real one,” Lowry said. “When we have the next Republican president, he will be scorned and hated by the media. And everyone will look back, ‘well, why can’t he be a compassionate conservative like that great statesman George W. Bush?’”

Fox News contributor Judith Miller slammed the media for suggesting that Bush’s bounce in public approval polls shows that the public just has a short memory. She said that the public is actually more discerning and has determined that the Bush presidency was more complex than it was made out to be by the press.

“Lawrence O’Donnell opened his show – his segment – on the Bush library by saying, ‘and now, here’s a little something about the memorial tribute to a man that doesn’t deserve one,’” Miller added. “I think the American people don’t like that kind of dissing of former presidents.”

“But maybe the MSNBC audience does,” Scott opined.

The panel turned to a statement made by Tom Brokaw on Meet the Press last weekend in which he said there is “enormous rage” in the Mideast over the “presumptuous of the United States” during a discussion of the factors which lead to the attack on Boston.

Lowry said that the goal posts have shifted from foreign nationals being upset over American invasions of Central Asian nations to being upset over the execution of drone strikes in those nations. “For the radical Islamist, there’s no proper U.S. policy except for if we curl up and die,” Lowry said.

Miller added that most Muslims do not hate the United States and are continually trying to immigrate to America.