Fox News’ Bob Beckel On The Five: Beck’s Audience ‘Is Going To Flee’ 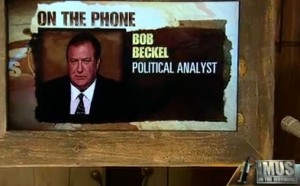 Democratic political strategist and co-host of the new Fox News show The Five, Bob Beckel, spoke with Don Imus this morning and attempted to promote his new role. Yet he may have been a bit too blunt with his expectations, revealing that he doubts any of Glenn Beck‘s audience will stick around and watch his new show in the same time slot.

Imus was excited that Greg Gutfeld and Juan Williams would also be co-hosts of the show, but a little less enthused about seeing more of Judge Andrew Napolitano. Yet Beckel was realistic about the potential longevity of the program:

“It’s going to replace [Glenn Beck] for the summer and we’ll see what happens after Labor Day. Replacing Beck – that audience is going to flee – so we’ll see if we can attract a political audience at 5.”

Might Beckel merely be lowering expectations for the new show or is he making an informed ratings prediction? Given that Beck’s ratings were already slowly on decline in that time period, that we are now in the Summer months and that Fox had difficulty selling commercial space during Beck’s show, it’s likely Fox will be viewing a number of indicators besides just retention of Beck’s audience, to ultimately determine whether the show is a success.

Beckel seemed more excited talking about the debt ceiling and giving advice to President Obama, urging that he can’t be pushed around anymore by Republicans. He also suggested “there’s nothing wrong with the debt, we print our own money” and argued that with this economy, now is not the time to be cutting spending. Yet with such potentially controversial views, maybe Beckel underestimates his own ability to help make a compelling enough show to keep Beck’s viewers at 5?