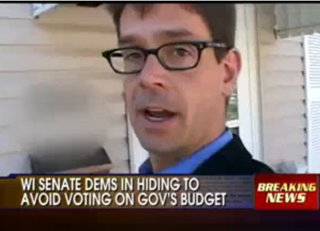 Greta Van Susteren is concerned about Wisconsin’s fourteen missing state senators– Democrats who, in order to delay the passing of a budget-cutting bill, have fled the state. But fear not, for she sent Fox News’ ambush reporter par excellence Griff Jenkins to play Carmen Sandiego with the missing Wisconsin state senators and he is, as she states, “hot on the trail.”

Jenkins puts on the gumshoe hat and explains the mechanisms around him that are being used to find the senators, explaining that, in what increasingly sounds like a comically large operation, there are “teams” in other parts of the state attempting to seek out the public officials. Jenkins first tries the home of a state senator, but sadly, Jenkins’ first attempt at Sen. Chris Larson‘s house failed, as he was not home. This led Jenkins to rethink his strategy, instead setting up a panopticon at a tower near the state capitol, where he would get a first peek at the senators should they choose to return.

Watching protesters and civilians drive by, Jenkins’ strategy appeared to have hit a dead end, so he tried giving the Best Western rumored to be housing the Democrats a call. Apparently those that ran the place were sworn to secrecy, as he got no information out of that either. Now it was time to hit the ground running– to the State House, where protesters actively told him they weren’t going to help him find a anyone. He also, finally, had an amusing run-in with another Fox News team there to report on the protests– another group of folks with no leads.

Jenkins may not have found the state senators, but at the very least, he has given them someone to look forward to seeing when they get back. The segment via Fox News below: