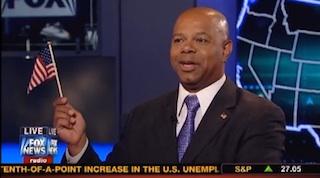 We’re all the way into August and, for the past few months, we haven’t gotten our annual “Incredibly Stupid ‘News’ Story of the Summer.” We’ve been sitting around the Mediaite office, shouting to the heavens, “Lord, where is our Ground Zero Mosque?!” and it looked like He had forsaken us. Then, finally, we got our answer as an army of conservatives rushed off to a chicken restaurant to support the First Amendment (“And nothing else. Yes, this was only about the First Amendment. Totally nothing else at all. Don’t look at me like that.”). But that’s not it! Perhaps as an apology for waiting so long to give us our heaping of Summer Stupid, the Lord has bestowed upon us another, even dumber controversy!

Guys, did you know that the American Olympic team doesn’t love America enough?!

That was the premise put forth a few minutes ago on a cable channel that has “News” right there in its name.

You see, this all started when Salon’s David Sirota tried to argue that American jingoism was hurting the Olympics. Yeah, because having a sporting competition that specifically pits countries against each other would be better without nationalistic pride.

So, okay. There’s the first bit of silliness. Now, can we get Fox News to instantly treat that absurdity with absolute seriousness? Oh, you bet we can!

Just a few minutes ago, David Webb, a Tea Partier (because…duh) and radio host, took to the airwaves to argue that Sirota’s column was just a symptom. You see, apparently, the US women’s gymnastics team aren’t wearing enough red, white, and blue and that is an example of “soft anti-America” beliefs.

Jesus, David. These little girls have sacrificed their chances to ever have normal adult bodies by horrible stunting their own growth all for the sake of this country. Isn’t that enough for you?! Can’t you leave their shiny outfits alone?!

Anyway, this is apparently a thing we are seriously talking about. Like seriously. Like human adults are going on television and doing multiple segments on this for millions of viewers.

Watch the video from Fox News (because…duh) below: