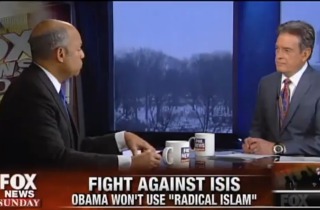 Why won’t President Barack Obama call this a battle against “Islamic extremism”? That was the question opening for a Fox News Sunday interview this week with Department of Homeland Security Sec. Jeh Johnson.

“From my perspective, whether referred to as Islamic extremism or violent extremism, ISIL is a terrorist organization that represents a serious potential threat to our homeland which has to be addressed through a whole approach,” Johnson told fill-in host John Roberts. “In our engagements around the country — I do a lot of these myself in Muslim communities, Islamic cultural centers — the thing I hear from leaders in the Muslim community in this country is ‘ISIL is attempting to hijack my religion. Our religion is about peace and brotherhood. ISIL is attempting to hijack that from us.’ They resent that. Most victims of ISIL are muslim.”

To openly label ISIS forces as fighting on behalf of some form of Islam, Johnson added, would give the group “more dignity than it deserves.”

“So this then is not an exercise in being politically correct but an exercise in not giving them legitimacy that they seek?” Roberts skeptically asked, to which Johnson replied that a “dangerous terrorist organization” like ISIS has 30,000 fighters on the group — “I’m more concerned about that, frankly, than I am what two words we use to refer to them.”

The Fox News host pressed on, however, noting that several prominent Democrats have even criticized the administration for the lack of “Islamic extremism” identifiers. “If you don’t identify them as a radical terrorist, religious ideology, can you adequately address the threat and develop a winning strategy?”

Johnson reiterated the administration’s belief that calling them “Islamic” gives ISIS too much credit.

After Roberts asked the secretary about Obama’s infamous Prayer Breakfast comments drawing a moral equivalence between Christian extremist violence during the Crusades and today’s Islamic-related violence, Johnson attempted to pivot to budgeting issues: “The Department of Homeland Security needs a budget by the end of the week — I hope you ask me about that.”

But the budget conversation didn’t come until after Roberts had a chance to grill Johnson on State Department spokeswoman Marie Harf‘s suggestion that a lack of job opportunities is a root cause of radicalization abroad.