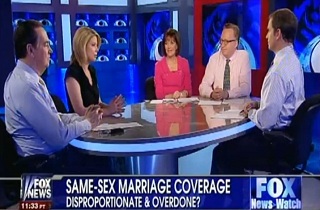 The battle over marriage equality was front and center this afternoon on Fox News Watch as the panelists debated the level of objectivity in the coverage and whether the issue was one of the most important of our time.

“I think it was pretty one sided because I think that reflects public opinion, especially young public opinion in America. I think the basic divide is between people who see this as a political issue in which intelligent people can disagree and others who see it as a basic human, civil right. If you’re in the later camp then you can’t have enough coverage of it,” said Fox News contributor Judith Miller

The Daily Beast‘s Kirsten Powers viewed the issue as more of a generational conflict. “Younger people tend to be the ones that overwhelmingly in support of gay marriage and older people are the ones who aren’t. I think the media is more populated by people on the younger scale, so that’s going to be their point of view,” said Powers.

Conservative columnist Cal Thomas expressed frustration with the coverage saying that the media is driving the coverage. “I haven’t seen so much cheerleading for an issue since that done by the media for President Obama,” said Thomas.

Watch clip below via FNC