Fox’s Carlson, Guests Battle Over ‘Out of Touch’ Obama: Does He ‘Know Absolutely Nothing’?
VIDEO

Fox’s Carlson, Guests Battle Over ‘Out of Touch’ Obama: Does He ‘Know Absolutely Nothing’? 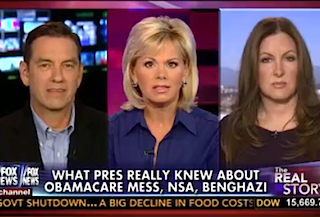 The latest scandal to engulf the White House, at least according to Fox News, concerns what President Obama knew when about everything from the Affordable Care Act rollout to new NSA spying revelations to last year’s attack on the U.S. consulate in Benghazi. “Are we to the point now where we have a president who knows absolutely nothing?” Gretchen Carlson asked her guests Tuesday afternoon. “Is this the eyes wide shut president?”

Though she found that turn of phrase “cute,” liberal radio host Leslie Marshall denied the suggestion that Obama is out of the loop. On the issues of national security in particular, Marshall said that for decades Democratic and Republican presidents have been briefed by the NSA, but cannot be expected to know every detail about every operation.

“It is comical, it’s absurd, it’s laughable,” conservative radio host Chris Plante said. “Who is the real president if he doesn’t know about these things?” He went on to describe a president who is “everything Democrats accused Ronald Reagan of being,” namely “out of touch, unaware of what’s going on around him and surprised.”

When Marshall brought up analogous situations from Obama’s Republican predecessor, Plante said, “If this was a Republican president he would have been nailed to a piece of wood long ago.”

Even Carlson could admit, “That’s a pretty strong statement.”