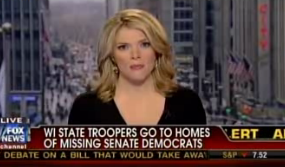 Fox News’ America Live had a weird segment Thursday, with Megyn Kelly starting by telling viewers her guest–one of the Wisconsin Democrats who’ve left the state in an effort to block a vote on Gov. Scott Walker‘s budget–had abruptly cancelled. Why? Because, Kelly said, “the press found him and others in Illinois and he’s relocating now.”

A back-up guest, Sen. Jon Erpenbach , volunteered to talk to Kelly, and it was an entertaining exchange, with Kelly at one point asking Erpenbach how he can justify staying in Illinois instead of returning to Madison and getting to work. “You have to go do your job. It is not your job to leave the state and cower in Illinois.”

“Megan, we’re not cowering, we are doing our jobs,” he insisted, leading Kelly to recite the oath the senator had taken, requiring that he uphold the state constitution and “faithfully discharge” his duties of office. “How is hiding out in Chicago discharging the duties of your office?”

The senator insisted he was doing his job, answering emails, doing constituent work, and ultimately drawing attention to Gov. Walker’s efforts to balance the budget, he says, at the expense of collective bargaining rights of workers. Kelly said those points had been made, and it seemed time to allow the budget to come to a vote.

“What we do in this country is we vote. You can vote no and you can rail on the senate floor why this is wrong. You gotta vote, Sir.”