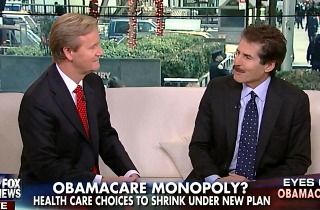 Fox Business Network host John Stossel sat down with Fox & Friends host Steve Doocy on Thursday and explained his controversial view that women should pay more than men for health insurance. Stossel said that this was appropriate because they use the services which hospitals provide and, as a result, they live longer.

“The web site is minor. They will fix that,” Stossel said of the problem-plagued HealthCare.Gov site. “Central planning is the problem because this just kills the market and the competition in the market that makes things better.”

“Yesterday, President [Barack] Obama stood in front of a bunch of women in Massachusetts and said, ‘No longer will those evil insurance companies be able to charge you women more,’” he continued. “But when did you last go to the doctor?”

“Women go to the doctor much more often than men,” he continued. “Maybe they’re smarter or maybe they’re hypochondriacs. Who knows? They live longer.”

“But if it’s insurance, you ought to be able to charge people who use the services more, more,” Stossel continued.

“It’s not fair if you pay less than she does,” Doocy shot back.

“It’s fair if you pay for what you use, unless you’re destitute,” Stossel concluded.

He ended the segment by saying that the Affordable Care Act has been a benefit for the public because it has focused the public mind on the fact that services cost money. He added that the law is forcing more people into health savings accounts as an alternative to the ACA.