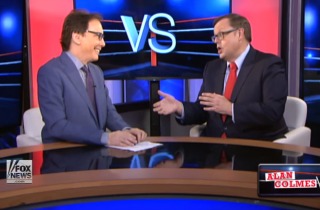 Y’know, it’s been a while since we’ve checked in with Fox’s resident persecution-complex broken record Todd Starnes. Last we heard from him, both the left and the right were mocking him for his incendiary comments about the turmoil in Baltimore.

Other than that, we’ve been relatively quiet on the Starnes beat, largely because he’s so predictable, but also because we need to maintain our own sanity.

But it’s been too long. And this is pretty funny: During a FoxNews.com debate with Alan Colmes, Starnes insisted that the massive company behind The Happiest Place on Earth® has beef with God and was likely lying when they explained why the word “God” was blocked from their website.

Back in December (or “years ago,” as Starnes thinks), the Fox radio talker reported that a 10-year-old from North Carolina was unable to tell the Disney Channel website that she is thankful for God. “Please be nice!” a prompt read in response. And after some sleuthing, the girl’s family figured out that it was the word “God” that was preventing her from posting.

After an internal investigation, Disney told Starnes that the company “employs word filtering technology to prevent profanity from appearing on our websites. Unfortunately, because so many people attempt to abuse the system and use the word ‘God’ in conjunction with profanity, in an abundance of caution our system is forced to catch and prevent any use of the word on our websites.”

Right. Much like how our Disqus comment service warns readers who attempt to find creative ways to use profanity. It’s how technology works. And sometimes well-meaning individuals get caught in the net.

Starnes is unconvinced. See, here’s why: Disney is in California. California legalized gay marriage. Gay marriage activists then started targeting public officials who opposed the concept. And how this is related to Disney, Starnes won’t explain.

Pressed further by Colmes, he said, “I don’t buy their explanation.”

So they lied? “I just don’t buy what they’re selling.”

So to Starnes, the perfectly logical (and common for this digital era) explanation was a lie. He just won’t outright say it.

(BTW, Bonus Starnes Points for how he began and ended the segment with a reference to “sweet tea.”)

Watch the full interview below, if you must. Hey, make it a drinking game!